Asia Pacific Biocides Market share was valued at above USD 3 billion in 2019 and industry is expected to witness a growth over 6.0% by 2026. 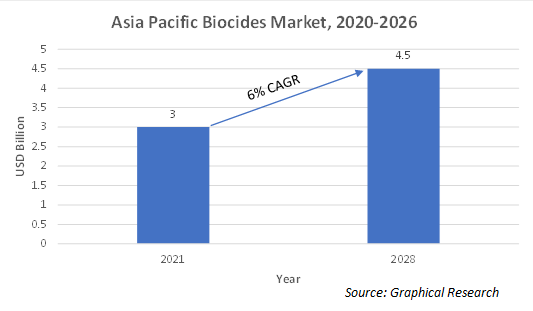 Metallic compound-based biocides generally consist of metals such as silver, copper & its alloys, and zinc. They are mainly used in the paints & coatings industry in order to counter deterioration due to microbial activities as well as to increase the shelf life of paints. Rapid industrialization in emerging economies have resulted in a surge in construction activities in the Asia Pacific region which has attributed to the increasing demand for paints & coatings. This is a major factor driving the Asia Pacific biocides market. In 2019, the biocides market from paints & coatings application sector accounted for a revenue of over USD 425 million in Asia Pacific region.

The growing food & beverage industry in the region is another major driving factor for the Asia Pacific biocides market. Biocides play an essential role in limiting the growth and spread of harmful micro-organisms. Growing working population, hectic work schedules, and rising disposable income of consumers are key factors attributing to the growing food & beverage market in APAC. Moreover, the prevalence of novel coronavirus has further augmented the demand for biocides in the region. In 2019, the market size from food & beverage application segment accounted for a revenue of USD 531.7 million.

The rising cosmetic industry especially in emerging economies is a key factor driving the Asia Pacific biocides market. Biocides are widely used in cosmetic products for skin cleansing by inhibiting the growth of micro-organisms. Growing awareness regarding personal care and increasing consumer disposable income have augmented the demand for cosmetic products. This has mainly attributed to the market growth of Asia Pacific biocides market. In 2019, the Asia Pacific market size from personal care application segment accounted for a revenue of over USD 475 million. Emerging economies such as China & India contributed to more than 60% of the revenue market share in the personal care application segment.

Economic growth, rising per-capita income, increasing healthcare awareness, and growing demand for paints & coatings are some of the major factors driving the overall market. Additionally, favorable FDI policies in emerging economies is another major factor expected to drive the growth of Asia Pacific biocides market. In 2019, countries such as China and India accounted for more than 50% of the revenue market share of the Asia Pacific biocides market.

Get this research report on Asia Pacific Biocides Market customized according to your business requirements.