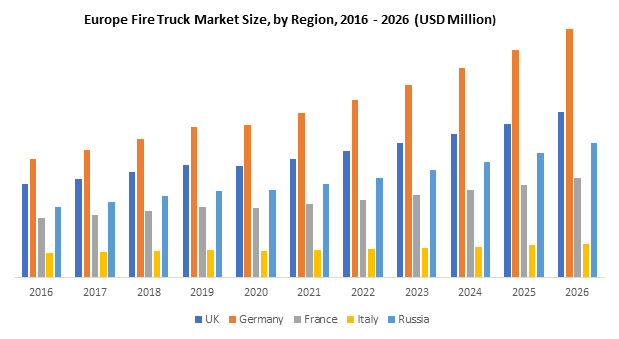 The increasing number of fire accidents in Europe is driving the demand for fire trucks in countries including Germany, Italy, France, the UK, and Russia. Stringent government regulations along with the rapid increase in awareness associated with the hazardous effects of emissions have led to the introduction of electric fire trucks in the region. R&D investments by manufacturers to introduce electric versions of fire trucks are generating lucrative growth opportunities for the Europe fire truck market. Several market players have introduced electric models of fire trucks. For instance, in April 2018, Kreisel Electric launched its first fully armed electric fire truck in Europe.

Increasing government spending on technologically advanced fire trucks will propel the fire truck market size. An increase in the number of fire incidents in Europe is encouraging fire authorities and governments to adopt technologically restructured fire trucks, contributing to market growth. The European government is focusing on the expenditure on fire safety services. For instance, in the year 2017, the European Union’s 28 Affiliate States spent around USD 33.8 billion on fire-protection services.

The emergence of the COVID-19 pandemic in Europe has impacted the fire truck market. European governments announced lockdowns in several countries to control the virus spread. This has led to the impermanent shutdown of the transportation and automotive industries. The procurement of raw materials has been unfavorably impacted due to limitations on international trade. This has affected the production capability of several industry players. Furthermore, the diversion in the governments’ focus toward the containment of the virus has led to a limited supply of funds to fire departments, hampering the market growth.

Increasing demand in the residential & commercial application segment in the region will create growth opportunities for the Europe fire truck market. Growing regional population and subsequent growth in construction activities have encouraged governments to impose stringent fire safety regulations across all sectors. The rapid increase in demand for safe infrastructure in the residential & commercial spaces is enhancing market size.

Evolving interest in front-line firefighting apparatuses and assemblies in developed economies is contributing significantly to the market growth. The airport segment will generate growth opportunities for the Europe fire truck market. The increasing use of fire trucks for evacuation & rescue operations on airports and the security at air terminals are anticipated to drive the market demand for fire trucks.

Prominent players functional in the market include Gimaex GmbH, Magirus GmbH, Albert Ziegler GmbH, and BAI Brescia Antincendi International SRL. These players are focusing primarily on new product launches to enhance their reach in the global market. For instance, in September 2020, Magirus GmbH launched its new truck for applications in the field of forest fire fighting and off-road. This aided the company to enhance its products in the market and gain a competitive edge.

What is the anticipated growth for the Europe Fire Truck industry share during the forecast period?
The industry share of Europe Fire Truck is projected to witness more than 6.5% growth rate during 2020 to 2026.
How has the Covid19 pandemic affected the market?
The emergence of the COVID-19 pandemic in Europe has impacted the fire truck market. European governments announced lockdowns in several countries to control the virus spread. This has led to the impermanent shutdown of the transportation and automotive industries.
Which are the prominent players functional in the market?
Prominent players functional in the Europe fire truck market include Gimaex GmbH, Magirus GmbH, Albert Ziegler GmbH, and BAI Brescia Antincendi International SRL.

Get this research report on Europe Fire Truck Market customized according to your business requirements.