Increasing demand for synthetic genes in developed economies is anticipated to propel the industry growth over the forecast period. Increasing acceptance and awareness regarding benefits of genetically modified crops and animals in modern farming will pave the way for the market growth. BT crops have longer shelf life and added nutritional perks and hence, are adopted by majority of the farmers practicing modern farming. For instance, according to the United States Department of Agriculture (USDA), currently, over 90% of U.S. corn, soybeans, and upland cotton are produced using genetically engineered (GE) varieties of seeds. Moreover, rising preference for modified genes in production of drugs utilized in cancer treatment will boost the market growth over the projected timeline.

Based on application, the market is fragmented into cell line engineering, animal genetic engineering, plant genetic engineering and other applications. The cell line engineering segment witnessed around 44% market share in 2019 and is projected to grow with similar trend over the forecast period. The growth is attributable to its growing applications in stem cell research, allowing very comprehensive studies to be done into the mechanisms of disease progression, cell biology, and therapeutic sensitivity. Technological advancements in gene editing techniques including Zinc Finger Nucleases (ZFNs), TALENs, and CRISPR/Cas have made cell engineering more easy and cheaper, thus boosting its growth over the analysis period. 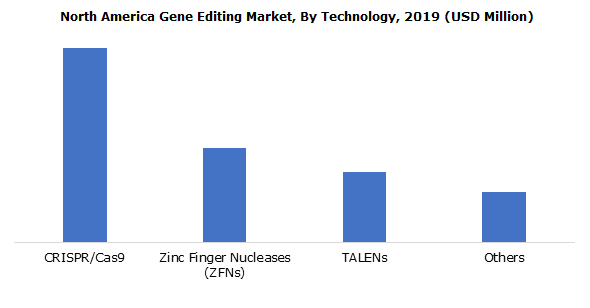 The gene editing market, based on technology, is classified into TALENs, Zinc Finger Nucleases (ZFNs), CRISPR/Cas9, and others. ZFNs segment accounted for over USD 329 million market value in 2019. It is an advanced gene editing tool and summarizes applications in genome editing in several organisms and different situations. With specifically engineered Zinc finger domains, target DNA sequences can be approached easily and this allows for precise alterations in the genomes of complex organisms. This is expected to prove beneficial for the segment growth over the forecast period.

Based on end-user, the industry is segmented into research institutes, contract research organizations (CROs), and biotech and pharma companies. The biotech and pharma companies segment held significant market share in 2019 and is expected to grow at around 14.5% CAGR. The growing focus of biotech industry on developing comprehensive gene editing tools will propel the segment progression. Advanced gene editing techniques enable industry participants to develop novel medical procedures that are efficient enough to treat a complex genetic disease as compared to the conventional counterpart. This is expected to pave the way for lucrative segment growth.

The U.S. gene editing market accounted for over USD 1.2 billion in 2019. Growing prevalence of rare diseases in the U.S. has stimulated the demand for gene editing tools that are utilized in developing drugs. According to the Rare Genomics Institute, one in every ten U.S. citizens suffer from some rare disease. Additionally, the U.S. has significant adoption rate of gene editing tools such as TALENs, CRISPR-Cas9, and ZFNs owing to the high amount of research activities being conducted in the country, thereby bolstering the overall market growth.

Some of the prominent market players operating in the industry include Integrated DNA Technologies, Thermo Fisher Scientific, Agilent Technologies, Takara Bio, Sangamo Therapeutics, Origene Technologies, EMD Millipore (Merck KGAa), Caribou Biosciences and others. These industry players are undertaking several inorganic and organic business strategies to garner higher market revenue in gene editing industry. For instance, in May 2020, Caribou Science entered into a clinical and commercial license agreement with MaxCyte. The strategic move aimed at gaining exclusive rights to use MaxCyte’s ExPERT platform and flow electroporation technology. This is anticipated to advance the company’s T-cell therapy programs based on gene editing and propel their business growth in the market.

Gene editing has a rich history that outlines an industry determined to aid humanity through the study of genetics. The precursor to gene editing started with the discoveries made in 1950s in the field of genetics that propelled the scientific world further towards innovation. This includes discovery of the double helix, first synthesized in vitro DNA, DNA ligases, etc. Later in 1985, the discovery of Zinc Finger Nuclease (ZFN) took place, the first technique ever for highly targeted gene editing. Followed by, discovery of transcription activator-like effector nucleases (TALENs) in 2011, and the ultimate discovery of CRISPR genome engineering tool in 2012. Till date, CRISPR has been used in wide area of disease diagnostics and therapies, and continues to surprise the scientific world with its high potential in many other applications.

Get this research report on North America Gene Editing Market customized according to your business requirements.