Europe Feed Phosphate Market share was valued at above USD 599.7 million in 2019 and industry is expected to witness substantial gains at over 2.9% by 2026. 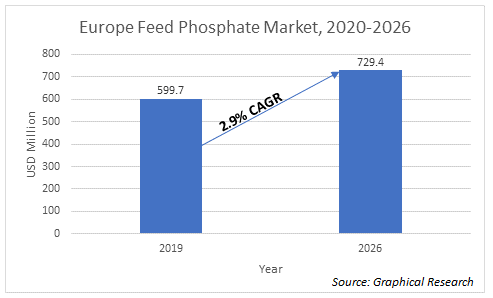 Feed phosphate are inorganic salts of phosphoric acid that are extracted from the phosphate rock. They are mainly use in the animal feed industry as an essential nutrient and provide animals a combination of calcium and magnesium, which aids in animal growth and development. Feed phosphate improves gut functionality of animals, improves fertility, ensuring optimal growth, and aiding in bone development. Hence these multiple benefits of feed phosphate in development of animal’s health led to drive its demand in the animal feed industry over the forecast period.

According to Europe Commission, Europe milk production growth is expected to reach 179 million tons in 2030 compared to 168 million tons in 2019 and made Europe a leading global supplier for dairy products. Hence, rising demand and production of dairy products led to generate high demand of feed phosphate in the Europe market as it is used as supplements for the diets of livestock which help animals to attain faster growth and weight gain. On the other hand, Europe meat consumption is anticipated to decline by 1kg per capita, to reach 68.6 kg per capita by 2030. Consumption of beef meat will drop from 10.8 kg per capita in 2019 to 10 kg per capita in 2030. Hence this decline in the consumption of beef and meat may decline the demand for feed phosphates in Europe.

Swine livestock held the highest share of approx. 22% of the Europe feed phosphate market in 2019 owing to the increasing demands for pork meat in the region. The high swine population in countries like Germany and Denmark may raise the demand for feed phosphates from the swine livestock. Changing consumption patterns of people coupled with the increased intake of processed food is likely to raise the demand for swine meat, in turn raising the product demand. The market through swine livestock is expected to reach over USD 160 million by 2026 growing at a CAGR of 2.8% over the forecast period.

Increasing beef and bovine consumption in Europe is likely to raise the demand for feed phosphates from cattle livestock. European market through cattle livestock is valued at USD 98 million in 2019. The presence of vast grasslands in the region encourage the breeding of cattle livestock. This is justified by the fact that in 2016, nearly half of the livestock population the the European Union consisted of cattle.

Germany held a leading position in the market in 2019. The increasing demand for meat globally and technological advancements in the meat processing industries and slaughterhouses in Germany may stimulate demand for feed phosphates in the country. Moreover, the increasing exports of German meat to countries including Italy, the Netherlands, China and Poland is likely to promote the growth of livestock industry, in turn raising the demand for feed phosphates in the country.

Get this research report on Europe Feed Phosphate Market customized according to your business requirements.