Asia Pacific Benzalkonium Chloride Market size was over USD 230 million in 2019 and industry expects to witness significant gains at over 9% by 2026. 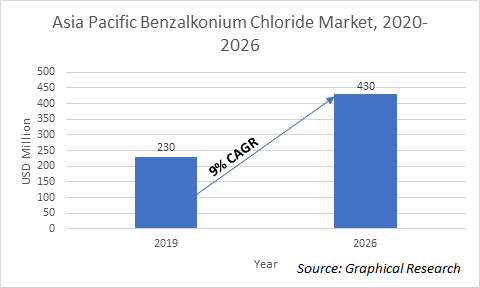 Benzalkonium chloride, also known as alkyldimethylbenzylammonium chloride (ADBAC) is a quaternary ammonium cationic surfactant. It is available as a white or yellowish white water-soluble powder or a soapy substance. It comes in powder form or solution form. It is available in hybrid grade along with pure grade. It acts as a cationic surfactant, phase transfer agent,  biocide and is used in different applications including preservatives in food industry, pest control, detergents in laundry industry, and emulsifying agents.

The rapid industrialization in Asia Pacific coupled with the rapid growth of the pesticide industry in the region is likely to raise the product demand. The presence of agriculture-dependent countries such as India, Australia, Japan, New Zealand and South Korea is the region may raise the demand for pesticides and fertilizers, thus boosting the demand for benzalkonium chloride. The increasing set up of industries in countries such as China and Japan is likely to create waste water treatment concerns, thus promoting the growth of the market.

Benzalkonium chloride 80% product dominated the market share in 2019. This is mainly attributed to its increasing applications in textile and paper & pulp industries. The rapid growth of the manufacturing sector in the region is likely to create rising concerns regarding industrial water treatment, which is expected to drive growth of the market. The increasing applications of the product as a disinfectant across several end use industries such as chemical, dairy, food & beverage, household, and horticulture may further raise the product demand.

Asia Pacific market from biocide application was valued over USD 170 million in 2019 and is expected to grow at the highest CAGR of 8.5% over the forecast period. This is mainly ascribed by its property of preventing pathogen growth on surfaces and its excellent toxicity against fungi, algae and enveloped viruses, thus encouraging its use as a biocide in sanitization and disinfection of dairy and food processing equipment and food outlets.

China benzalkonium chloride market is expected to witness significant gains over the forecast period owing to the increasing industrialization and waste water treatment concerns coupled with the rapid growth of chemical sector in the country. This is justified by the statistics released by The European Chemical Industry Council, according to which China's share of world chemicals market sales in 2018 was around 35.8%.

Get this research report on Asia Pacific Benzalkonium Chloride Market customized according to your business requirements.