mHealth is a field of mobile health in healthcare industry providing user-friendly mobile healthcare services with effective communication. With rising awareness pertaining to the provisions by mHealth, the adoption of mHealth gadgets including tablets, smartphones and wearable devices has considerably increased in the past few years. The major factors driving the growth of mHealth market are government initiatives, advancement of technologies, growing adoption for a healthy lifestyle, increasing chronic disorders and cost-effective care. Additionally, growing prevalence of some of the key market players operating in the field of mHealth with constant investment in technological innovations and promotion of mHealth is expected to fuel the mHealth market growth. 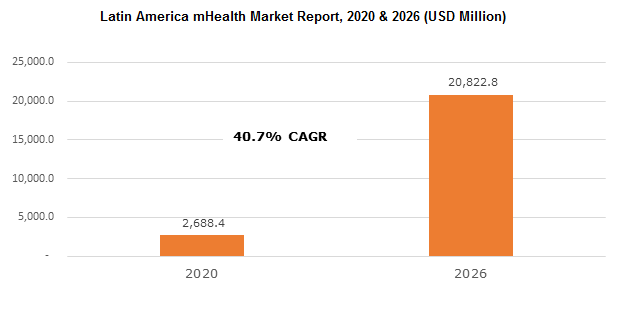 Increasing incidence of chronic diseases such as cardiovascular diseases, diabetes, neurological disorders among others is expected to stimulate the Latin America mHealth market. Technology penetration in the region is progressing at a momentous speed. Smartphone and internet users are at the same level in Latin America as in North America, Southeast Asia, and Europe. According to a recently published article, it was reported that around 300 million people in Latin America use smartphones currently. Countries such as Brazil, Argentina, Colombia, Chile, Peru, Mexico have around 84% of smartphone penetration in the region. Hence, the abovementioned parameters have in turn propelled the mHealth market growth.

Increasing prevalence of chronic diseases is one of the pivotal factors that has created the need to adopt mHealth technologies. Growing number of patient pools with chronic diseases in the region will drive the demand for mHealth services. Rising adoption of unhealthy lifestyles and habits such as alcohol consumption and tobacco smoking is one of the major reasons for the high prevalence of chronic conditions. According to the statistics published by the World Health Organization, in 2016, about 30% of the population in Colombia suffered from cardiovascular diseases. In addition, there is a rapid increase in the incidence of diabetes in Mexico making it one of the leading causes of death in the country. Upsurge in diabetes poses a threat to the stability of Mexico’s public health care system. Continuous rise in the incidence of chronic diseases will have significant implications on healthcare resources, thereby accelerating the business growth in the region. With an increasing number of chronic conditions, there will be more advancement in mHealth services, hence driving the market growth in the future.

On the basis of platform, the market is segmented as mobile apps and wearable devices. The wearable devices segment is expected to witness the fastest growth at 41.0% over the forecasted period. The high growth can be attributed to the growing number of sports and fitness population along with increase in awareness regarding health. Additionally, Brazilian and Mexican population is primarily engaged in usage of wearable devices that aids the patients suffering from obesity in weight management and keeps the patients active. Wearable devices provide real-time analysis of health related data through physical activities, thereby uplifting the demand for wearable devices. Hence, the above-mentioned factors are projected to fuel the growth of wearable devices in Latin American region.

On the basis of applications, the market is segmented as communication and training, education and awareness, disease and epidemic outbreak tracking, diagnostics and treatment, remote data collection, remote monitoring and others. Remote data collection segment held a significant market share and was valued at USD 523.6 million in 2019. The largest share of the segment can be attributed to collection and transmission of data via mobile phones. The system is designed to send e-mails or messages if symptoms are recorded and data is aggregated in a centralized database. Also, the data is made accessible to medical professionals through mHealth platform. Additionally, it is cost-effective, fast and large amounts of data can be collected through various locations. Hence, the above-mentioned factors will enhance the growth of the market in Latin American region.

On the basis of end-use, the market is segmented into physicians, patients, insurance company, research centers, pharmacy, biopharmaceutical companies, government, tech company and others. Patients segment is expected to witness a lucrative growth at a CAGR of 41.6% over the forecasted period. The higher growth of the segment can be attributed to the increased adoption in mHealth services by the patient segment. According to a study, in 2017, more than 40 million patients in Brazil and Mexico were treated via mobile health services. The provisions of mHealth for patients such as early diagnosis, early prevention, healthier workforce and significant reduction in costs have led to an exponential increase in demand for mHealth services by Latin American population. Additionally, the job opportunities and mHealth deployments needed in the region have increased owing to the adoption of mHealth services by patients. Moreover, the ongoing pandemic has resulted in increased number of patients using mHealth services. Hence, the above-mentioned factors are projected to boost the growth of the market in forthcoming years.

Brazil mHealth market was valued at around USD 910.0 million in 2019 and will witness lucrative growth in the upcoming years. The high market revenue is attributed to the growing prevalence of mHealth treatment services for chronic diseases including cardiovascular, respiratory and metabolic diseases. Rising number of mobile health users preferring wearable devices and essential mHealth apps with expanding access to healthcare services has uplifted the market growth. Additionally, collaboration between IT sectors and biopharmaceutical companies has increased the usage of mHealth services in the region. Moreover, the government in Brazil has undertaken several initiatives to support the provisions by mHealth. Furthermore, the Brazilian Unified National Health system has been taking important measures to promote mHealth to save life of the people during the ongoing pandemic. Hence, the above-mentioned factors have contributed to the growth of mHealth in the country.

Some of the major industry players operating in Latin America mHealth market include Philips Healthcare, Samsung Electronics, Vodafone group, Allscripts Healthcare Solutions, Cardionet, Inc., Medtronic, Inc. among others. These industry players are proposing strategic mergers, acquisitions, partnerships and to strengthen their market position. For instance, in April 2020, Apple announced collaboration with Google to develop a new system using apps for contact tracing to track down the people with whom infected patients have interacted. This strategic move will assist the company in expanding customer base and strengthening their industrial position. The collaboration will positively impact the mHealth market growth in Latin America.

mHealth services commenced in the region with increase in digitalization in the healthcare industry. Owing to the digitalization, the Latin American population reduced its dependency on cash flow, thereby resulting in adoption of digital payments. Over the years, adoption of technologically advanced products coupled with digitalization has resulted in increased awareness among the population pertaining to mobile health services. Additionally, government initiatives were implemented, and health-related awareness was promoted over time that led to an increase in use of mHealth services. Moreover, as the economies of the countries in Latin America developed, there was an exponential rise in usage of mHealth services. Furthermore, the market players have continuously invested in the mHealth market to garner share as the economy progressed. Therefore, engagement of such market players will continue to propel the market growth in the forthcoming years.