North America Field Programmable Gate Array (FPGA) Share was estimated to be around USD 1.5 billion in 2019 and is expected to grow at a CAGR of over 11%. 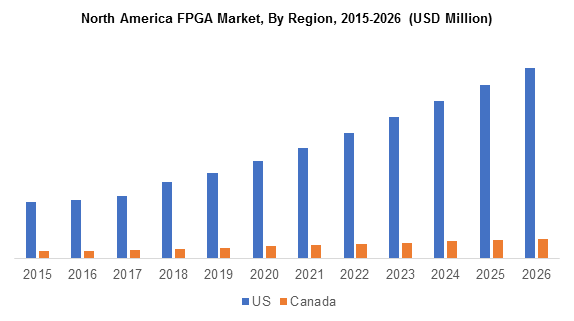 The region is one of the fastest-growing markets for technologies such as IoT, AI, machine learning, and big data analytics. The region is experiencing high adoption of IoT technologies across all industry verticals including smart city, manufacturing, retail, and commercial, among others in the U.S. and Canada. This will create a demand for high computing in data centers, driving the North America FPGA market growth. According to GMSA Intelligence, the number of IoT connections in North America is expected to increase from 2.8 billion connections in 2019 to 5.4 billion IoT connections by 2025. The rising number of IoT devices will further propel the adoption of FPGA in the region.

The flash-based architecture segment in market held a major share of over 40% in 2019 and is projected to grow at a CAGR of around 11% by 2026. The growth of the segment is attributed to several advantages, such as high tolerance for radiation effects, low power consumption, and high reliability that makes it ideal for defense & aerospace, telecommunication, and data center applications.

The <28nm process technology segment held a market share of 23% in 2019 and is projected to grow at a CAGR of 13% from 2020 to 2026. Companies in the market are majorly focusing on product advancement and enhancing the process technology to improve device performance and demand for compact products. In August 2019, Xilinx introduced the industry’s largest FPGA device based on 16nm process technology, which is integrated with 35 billion transistors.

The consumer electronics application segment is showcasing a significant growth opportunity in the FPGA market, growing at a CAGR of 8% during the forecast timeline. The U.S. consumer market is gradually increasing owing to the growing adoption of smartphones and portable electronic devices. According to the GSM Association, the U.S. is the largest market for mobile phones across the globe. In 2019, the country accounted for USD 280 billion in smartphone sales, which is 50% more than that of China. Furthermore, superior internet connectivity in the region has facilitated and increased the adoption of smart technologies, portable devices, and smart home appliances, which will flourish the demand for FPGA in the coming years.

The industry players in the region are investing heavily in new capabilities and implementing several merger & acquisition strategies to gain a competitive edge in the market. For instance, in April 2019, Intel Corporation acquired Omnitek, one of the active players in the FPGA industry. The company has developed more than 220 FPGA IP cores and has expertise in customized vision and Artificial Intelligence (AI) inference on FPGA architecture. Some of the players operating in the market are Cyprus Semiconductor Corporation, Intel Corporation, Texas Instrument Incorporated, Microchip Technology, Xilinx, Achronix Semiconductor Corp., and Gidel, among others.

Get this research report on North America FPGA Market customized according to your business requirements.