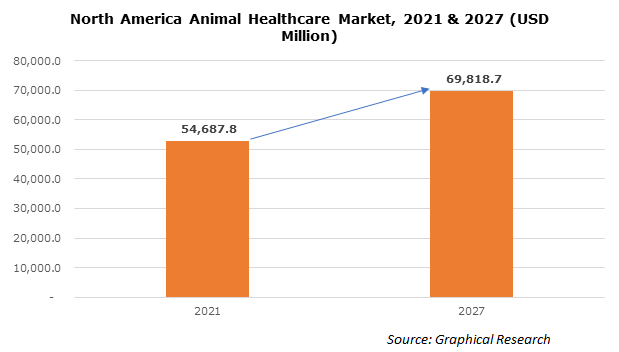 Increasing animal adoption caters to growth in animal care services. According to the American Pet Products Association reports, around USD 72.6 billion was spent on animal care in 2018. Due to increase in pet adoption, a significant need for vaccination, a suitable diet, medicines, generic drugs, and surgeries will play vital role in driving market growth. Furthermore, animal healthcare market is growing due to increasing awareness and companionship among people and easy provision of the needful by government.

The significant rise seen in animal healthcare services due to technological advancements has catered rise in animal healthcare market. According to the recent research article, around 69% of millennials are inclined towards mobile apps that helps to track health habits, nutritional intake, alert for pet care services. These advancements provide owners with pet cams and automated feeders that make pet care easy. Hence, the aforementioned factors will augment market growth in future.

Pharmaceuticals segment held a significant growth of around 4.0% CAGR during analysis timeframe. The segment is further bifurcated into drugs, vaccines and medicated feed additives. The rise in market for pharmaceuticals is attributed to rising number of pet animals and increased risk of infections among them. Also, the increasing adoption of livestock for human consumption contributes to drive market for animal healthcare. Further, the pharmaceuticals are used as therapeutic drugs and growth promoters in animals. This fuel growth of segment during the forecasting years.

Distributors segment is projected to grow at a substantial pace to reach around USD 70.0 billion in 2026. The growth of segment is attributed to increasing cases of animal surgeries due to the emphasis on livestock and companion animal health. Furthermore, presence of technologically and sophisticated advanced instruments in veterinary care will bolster the market growth.

Canada animal healthcare market is poised to exceed USD 5.5 billion by 2019 owing to increased awareness about animal health and the rising government initiatives in country. For instance, the veterinarians and veterinary hospitals in Canada promote animal health as a part of animal health week celebrations every year. The increasing prevalence of zoonotic diseases and the advancement in technology propel the market growth in the country.

Some of the major industry players involved in North America Animal Healthcare Market include Bayer AG, B. Braun Melsungen AG, Elanco, IDEXX Laboratories, among others. The companies are adopting various inorganic strategies such as acquisition, collaborations and partnership to maintain market position. For instance, in August 2019, Elanco announced acquisition of Bayer’s animal healthcare. This transaction helped Elanco to double its companion animal business and advancing product portfolio

The veterinary practice initially came into existence in 9,000 BC. The animal healthcare developed in latter part of 19th century. The veterinary care was less emphasised in previous times. However, since the early 1900s pets began to receive medical care more commonly. American Veterinary Medical Association came into being to promote veterinary medicine in 1863. Further, in 1965, the Food and Drug Administration added a Veterinary Medical Branch to manage animal pharmaceuticals which later became the Center for Veterinary Medicine (CVM) that oversees regulations related to medicine, food, and other products for animals. Advancements in veterinary technology and diagnostics continue to improve the ability to detect diseases early. Presently, awareness about animal healthcare has significantly increased in the North America region.