Animal healthcare refers to the medical specialty concerned with the wellness of the companion as well as farm animals. It includes diagnosis, prevention, control, and treatment of the diseases affecting the health of the animals. 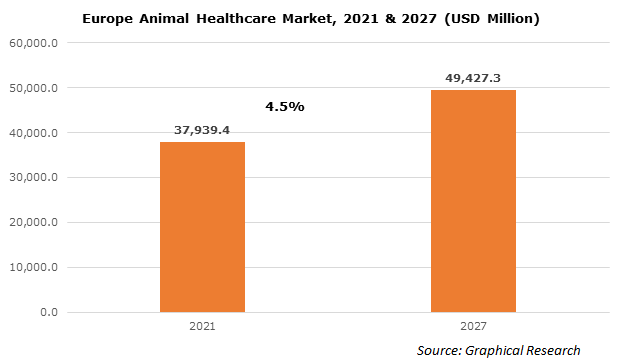 Growing pet adoption for companionship among the geriatric population will have a significant impact on the market expansion. Numerous research studies show that having a companion animal at home makes a great company for the owner. Similarly, companion animals such as cats and dogs keep their owners energetic, protect the home, and at the same time remain friends specifically for the children & elders.

According to the European Pet Food Industry data, approximately 80 million households across the European Union owned at least one pet. The surging usage of pets in films and ad campaigns has boosted the attraction towards pet adoption among the overall population in the European region.

An increase in the number of livestock and companion animals, a rise in number of animal surgeries, and augmenting incidences of zoonotic disorders are some of the variables contributing to the segment growth. Similarly, large number of consumers choose the accessibility of veterinary pharmacies in the surrounding location that suits their needs.

Get this research report on Europe Animal Healthcare Market customized according to your business requirements.