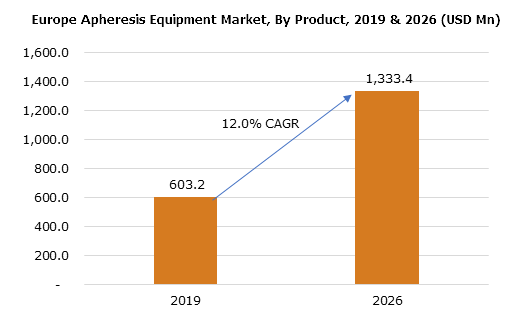 Increasing prevalence of blood disorders is expected to boost the adoption of apheresis equipment across Europe. Blood-related diseases like sickle-cell anaemia, haemophilia, and others affect millions of people in the region. Apheresis machines are beneficial for the treatment of a variety of blood-based disorders. These devices have several applications for in-situ separation of blood components, including automated RBC exchange in adults or children with sickle cell disease. The demand for apheresis devices that are capable of reducing pathogens in platelets and plasma components to lower the risk of transfusion-transmitted infections is thus growing rapidly.

Technological advancements in apheresis equipment will create substantial demand in the upcoming years. Growing technological advancements in healthcare field have provided enormous opportunities to safely treat chronic diseases that previously defied conventional medicine. For instance, Fresenius Kabi introduced the COM.TEC C5 separation chamber that efficiently reduces the separation time to less than 60 minutes.  The versatile applications for stem cell, therapeutic plasma, and platelet collections using a single device make the COM.TEC a multiprocedural platform. Furthermore, the technology vendors play a major role in enhancing apheresis machine features. Moreover, new protocols are continuously being developed and evaluated in the attempt to control and find out the variables necessary to ensure that each disease process is being treated in the most effective manner possible. Thus, ongoing research will further impact the segmental growth in the upcoming years.

By application, the apheresis equipment market is segmented as renal disease, neurology, hematology and others. Renal disease segment is expected to account a significant revenue share in the forecast timeframe to reach around 160.0 billion by 2026. This is attributed to increasing cases of chronic kidney disease (CKD) in the region. The prevalence of CKD varies from 3.31% in Norway and 17.3% in Northeast Germany. Thus, aforementioned factors will upsurge the segment growth in the projected timeframe.

Based on procedure, the apheresis equipment market is divided into photopheresis, plasmapheresis, LDL apheresis, plateletpheresis, leukapheresis and erythrocytapheresis. Erythrocytapheresis segment is projected to show 13.2% CAGR in the analysis timeline. The procedure includes replacement of the patient’s red blood cells (RBCs) with donor RBCs that is performed manually using a cell separator. Erythrocytapheresis is used to treat sickle cell disease, ABO incompatible bone marrow transplants, babesia, hereditary hemochromatosis, and infections such as malaria wherein red blood cells are damaged. Increasing incidence of such diseases contributes to drive the market for erythroctapheresis in the European region.

Apheresis equipment market based on technology is segmented as membrane filtration and centrifugation. Centrifugation segment is projected to show about 13.0% CAGR throughout the estimation timeframe. Component of interest after centrifugation is harvested using outgoing tubes and the rest components are returned back to the patient. In addition, widespread acceptance of centrifugation technology will further aid segment expansion in future.

Germany apheresis equipment market is estimated to exceed USD 134.0 billion in 2019. Presence of organizations such as National Blood Centre and German Red Cross Blood Transfusion Services, among others that are assigned to look after collection, storage, testing and distribution of blood assists device adoption. These organizations work to create awareness about blood donation and increase the number of blood transfusion procedures in the country. Also, growing elderly population that is prone to suffer from blood-related disorders will further augment Germany apheresis equipment market size.

Some of the major industry players involved in Europe apheresis equipment market include Fresenius SE & Co. KGaA, B. Braun Melsungen AG, Cerus Corporation, Haemonetics Corporation among others. Collaborations, agreements and acquisitions are some of the key strategies adopted by the market players to progress in the industry.

Apheresis refers to a Greek word for ‘separate’ or ‘to take away’. The process of apheresis refers to the removal of white blood from the patient or donor. The process was initially introduced by the Egyptians in around 1000 BC to remove bad blood from the human body. This process continued until the end of 19th century. The process of apheresis was developed in 1914 by John Abel and gained major acceptance in the end of Second World WarSubsequent development in the equipment has led to greater adoption. Furthermore, some of the common blood diseases such as von Willebrand disease (VWD), haemophilia, leukaemia-lymphoma, and myeloma are compelling the market growth in the region.

At what growth rate is Europe Apheresis Equipment Market expected to develop by 2026?
According to Graphical Research, Europe Apheresis Equipment Market Share was valued at USD 603.2 million in 2019 and is expected to witness over 11.5% CAGR from 2019 to 2026.
On what basis is the Segmentation of market done?
Europe Apheresis Equipment Market is segmented on basis of Product, Application, Procedure & Technology.
Which are the key players associated with this market?
Some of the major industry players involved in Europe apheresis equipment market include Fresenius SE & Co. KGaA, B. Braun Melsungen AG, Cerus Corporation, Haemonetics Corporation among others. Collaborations, agreements and acquisitions are some of the key strategies adopted by the market players to progress in the industry.

Get this research report on Europe Apheresis Equipment Market customized according to your business requirements.