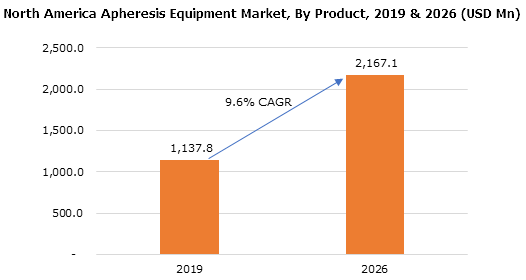 The market growth is attributed to rising incidence of blood- related disorders and phlebotomy disease. For instance, as per the Centers for Disease Control and Prevention (CDC) 2017 reports, approximately 5,382 deaths were reported due to anemia incidence in U.S. Additionally, favorable government initiatives and reimbursement policies will further boost the market growth in the forthcoming years.

Growing technological advancements in apheresis devices are leading to development of innovative equipment that further contributes to high revenue share. Rise in number of research & development by pharmaceutical companies as well as increasing number of platelet donors are expected to serve as high impacting factors for business growth. Furthermore, emerging awareness pertaining to platelet donation is expected to escalate the overall demand in North America. However, lack of histocompatibility may hamper the industry growth during the forecast period.

Apheresis equipment market is segmented on the basis of application as renal disease, neurology, hematology and others. Renal disease segment was valued over USD 144.0 million in 2019 and estimated to show lucrative growth in the coming years. Considerable segmental growth is attributed to increasing number of patients suffering from renal disease. The disease is treated with different techniques such as double filtration and plasma exchange for better patient convenience. Thus, increasing adoption of such technique will escalate the segmental growth in future.

Market is classified as photopheresis, plasmapheresis, Leukapheresis, Erythrocytapheresis, LDL-apheresis, plateletpheresis and others, on the basis of procedure. Plasmapheresis segment held more than 50% revenue share in 2019. Segmental growth is attributed to increasing adoption of apheresis procedures in the region. Additionally, treatment of rare diseases including familial hypercholesterolemia among others will drive plasmapheresis market size in the forecast period.

Based on technology, the apheresis equipment market is divided into membrane filtration and configuration. Membrane filtration segment was valued around USD 650 million in 2019 and is anticipated to show substantial growth during the analysis timeframe. Membrane filters are useful in plasma filtration from other blood components. This method avoids depletion of blood coagulants and is less time-consuming, and thus decreases the need of fluid replacement. Greater efficacy exhibited by this technology leads to increase in its adoption rate, thereby, augmenting the market size.

The U.S. apheresis equipment market accounted for more than USD 950 million in 2019 and expected to dominate the market in the analysis period. The U.S. government is involved in various initiatives and funding for apheresis devices and research. Additionally, U.S. exports large quantities of blood and blood components, thereby influencing the demand for apheresis equipment in the country.

Some of the major industry players involved in the market include Fresenius SE & Co. KGaA, Cerus Corporation, B. Braun Melsungen Ag and Haemonetics Corporation among others. These companies are adopting various inorganic strategies such as collaborations, mergers and acquisitions to maintain the market position. For instance, in June 2019, Cerus Corporation introduced its new corporate branding campaign building in California. This strategy aims to build upon the company’s leadership position to safeguard the blood supply.

Apheresis equipment industry has undergone a technological revolution during the past years. Innovations such as ultrasonic air bubble detectors, dry-heat fluid warmers & optical fluid level detectors and adoption of evidence-based indications in this field, has made it necessary for hospitals, clinics and laboratories to draw guidelines on the clinical indication for the use of apheresis equipment. For instance, the American Society for Apheresis (ASFA) has given guidelines for clinicians and doctors to evaluate the appropriateness of apheresis equipment. Apheresis devices have evolved from tailored-patient approach (TPA) to patient-centred approach (PCC). The PCC in apheresis has emerged as a primary approach and helped to improve quality with cost-effective procedures. Thus, continuous advances by manufacturers and growing demand for apheresis equipment will pose momentous industry growth in the forthcoming years.

Get this research report on North America Apheresis Equipment Market customized according to your business requirements.