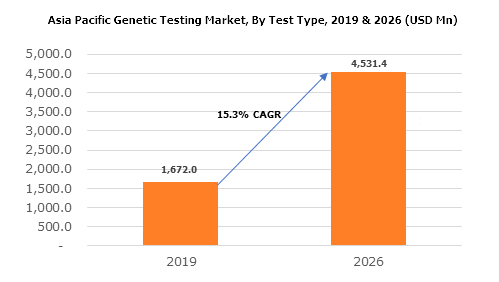 The genetic testing involves examination of the DNA and reveals the genetic aberrations and mutation in the sequence. These mutations highlight the genetic disorders depending on deletion or insertion of genetic factors. These tests help the patient or customer to identify the defects and take appropriate measures for the same. There are various type of test depending on the condition or requirement of the patient.

The adoption of genetic testing by physicians has resulted into increased demand of genetic testing owing to early detection of diseases and providing early care. The test helps the clinicians to determine, diagnose, screen and predict the genetic disorders such as Apert syndrome, cystic fibrosis, down syndrome and others. The availability of disease specific test proves to be boon for the industry growth. For instance, the BRACS test is used for detection of breast and ovarian cancer. The adoption of these test has made clinical workflow easy with provision of proper treatment to the patient hence will increase the demand of genetic testing over the analysis timeframe.

Nutrigenomic testing segment held around USD 75.0 million revenue in 2019. The sedentary lifestyle has resulted into obesity, endocrine disorders, cardiovascular disease and others. These disorders and diseases have provoked the patients to adapt healthy changes such as exercises, defined nutritional requirements for the body. Nutrigenomic testing offers analysis of food items and genetic makeup of an individual and alters the healthy outcomes. The changes in lifestyle and food consumptions has positively impacted patient’s health and disease prevalence and hence will augment the demand for nutrigenomic testing over the forecast period.

Cardiovascular segment is projected to show around 16.0% CAGR throughout the analysis timeline. The inherited cardiovascular diseases such as cardiac amyloidosis, familial dilated cardiomyopathy, cardiac myxoma, brugada syndrome and other act as a driving factor to this segment growth. The gene pool of an individual determines the core strength of heart muscles, arteries and blood vessel communication with the body cells. The slightest of mutation can lead to fatal conditions such as arteries blockage, affected blood flow to heart and that leads to heart diseases. The introduction of genetic testing in cardiovascular diseases has helped the patient’s and related family members to take precautions and treatments. Moreover, favourable reimbursement policies have helped the diagnosis and treatment accessible to patients thus, augmenting the Asia Pacific genetic testing market.

Japan genetic testing market is poised to exceed USD 450.0 million by 2019 owing to growth in genetic disorders and cancer diseases in the country. The genetic test helps to analyse the tumour and provides related drugs and therapies for better treatment. Due to growing disease prevalence, the Council Committee of Ethics of the Japan Society of Human Genetics has approved and set rules for usage of genetic testing and counselling for patient benefits. The awareness among the patients has led to decrease in the health risk. Additionally, the upcoming start-ups and online availability of genetic test and data will  further drive the market over the coming years.

Some of the major industry players involved in Asia Pacific genetic testing market include Abbott, Acumed LLC, B. Braun Melsungen, CONMED Corporation, Integra LifeScience Holdings Corporation, Stryker Corporation and others. The companies are adopting various inorganic strategies such as collaborations, mergers and acquisitions for service development to maintain the market position. For instance, in February 2020, Abbott gets FDA approvals for blood and plasma screening that helps in immunoassay and clinical chemistry test. This approval has helped the company to expands its genetic testing product portfolio and is revenue growth.

Asia Pacific region has disease indication of cystic fibrosis, phenylketonuria, recurrent pregnancy loss, sickle cell anaemia and others. The onset of these diseases is due to lack of awareness and services in developing countries. These genetic test helps the patients and doctors to detect the genetic disorders and take necessary measures for future treatments. The first Japanese medical genetics division was introduced in Department of Genetics, Kanagawa Children’s Medical Center in 1970. Later, the cross-disciplinary and therapies were developed in other hospitals to provide adequate amount of treatments to patients. The introduction of prenatal genetic test has helped the new parents to take decisions about medical healthcare. Recently, the introduction of the Japanese Society for Genetic Counselling (JSGC) and the Japanese Society for Gene Diagnosis and Therapy (JSGDT) has helped to increase awareness and provide counselling regarding genetic test. The associations focus on benefitting the patients with improved clinical a gene-related application. The growing awareness of patients and clinicians towards genomic development has fuelled the growth of Asia Pacific genetic testing in forthcoming years.

Get this research report on Asia Pacific Genetic Testing Market customized according to your business requirements.