UK Electronic Security Market share is estimated to be over USD 6 billion in 2019 and is estimated to showcase lucrative growth between 2020 and 2026 with a CAGR of over 8%. 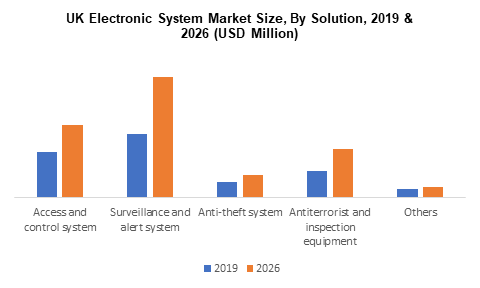 UK Electronic security market growth is attributed to rapid industrialization, urbanization, and growing instances of organized crimes such as smuggling and property theft. The UK government is investing huge amounts in safety and security devices for improving public safety across the country. According to the British Security Industry Association (BSIA), in 2019, the country had about five million CCTV cameras in use. Also, in December 2017, the government increased the police funding by USD 487 million, allowing them to utilize advanced safety and security devices for enhancing public safety.

The anti-theft system segment in the market is anticipated to show a growth rate of over 6% CAGR during the forecast timeline. The market demand is estimated to increase specifically from automobile, retail, and residential sectors due to rise in incidences of theft and misplacing of goods. According to the UK’s Office for National Statistics, in 2018, UK Police recorded a 11% increase in robbery offenses (to 88,177 offenses). Theft of several high-priced items, such as DVDs, iPads, video games, and microwaves, was recorded by retailers, compelling retailers to equip their stores with anti-theft systems.

The public sector segment in the market is expected to register a growth rate of over 5% during the forecast timeframe. The segment growth is attributed to increasing international trade and the number of air passengers in the UK. According to the Civil Aviation Authority (CAA), around 290 million passengers traveled through airports in the UK in 2018. With increasing air travelers, the need for enhanced security & safety devices for preventing threats and other crimes is also increasing. Major airline companies in the UK are installing advanced security devices to safeguard their passengers. For instance, in March 2018, British Airways announced to expand its biometric technology for verifying the identity of passengers at boarding gates. In addition, security systems, such as surveillance cameras installed at airports, can be integrated with advanced software solutions to aid in the identification of criminals, whose critical data is already recorded in the criminal database.

The manufacturers are focusing on developing new products with higher efficiency and improved technology. The players are continuously investing in R&D activities to introduce advanced technologies in the market. Market players operating in the country are introducing improved products with higher efficiency and advanced technologies in order to distinguish themselves in the highly competitive environment. The market players are focusing on improving their presence by expanding their sales network across the country. For instance, in December 2019, 360 Vision Technology Ltd., a CCTV camera manufacturer based in the UK announced the launch of Predator PTZ camera, allowing fast and easy integration with several leading IP VMS, matrices, DVR’s, and systems.