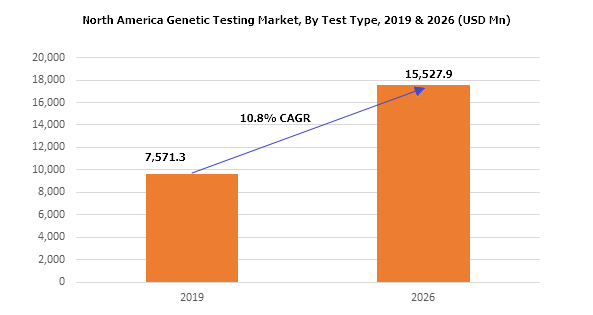 Genetic testing is a medical procedure that helps to determine changes in genes, proteins and chromosomes. These changes assist to detect development of genetic disorders and will be useful to take further measures. There are many genetic testing developed such as molecular, chromosomal test to analyze the genetic disorder according to patient’s need.

Technological innovations such as biochip and chromosomal microarray analysis for detection of genetic disorders will positively impact the market growth. The chromosomal microarray analysis (CMA) is the procedure used to detect genetic duplication with the help of high sensitivity for sub-microscopic abnormalities. The CMA is applicable in prenatal and postnatal conditions for identification of the disorders. Moreover, biochip is a technological advancement that helps to easily detect genetic aberrations on a glass slide. These advancements have helped in early detection of the genetic disorders for essential medical care and will thus upsurge the demand for North America genetic testing in the upcoming years.

Prenatal and new-born testing segment held around USD 2.0 billion revenue in 2019. The testing involves identification of genetic disorders within 24 hrs of new-born baby. The procedure is safe and usually done by pricking the baby’s heel for few drops of blood. The test is for screening genetic disorders such as congenital hypothyroidism, phenylketonuria, galactosemia, sickle cell disease, biotinidase deficiency and others. The early detection will help the parents to take required measures and will thus augment the demand for prenatal and new-born testing over the forecast period.

Cancer segment is projected to show around 11.0% CAGR throughout the analysis timeline. Cancers are a type of genetic disorders that result into unaccountable division of cells. The hereditary cancer is caused due to gene mutation. Various types of cancers are diagnosed with genetic testing in breast, ovarian, thyroid, colon and other type of cancers. These test help to estimate the chances of cancer development. Doctors and clinicians recommend these genetic tests due to its successful outcomes. Furthermore, reimbursement policies for genetic testing will further augment the North America genetic testing market.

U.S. genetic testing market is poised to exceed USD 6.5 billion by 2019 owing to growing burden of genetic disorders and cancer in the country. Adoption of sedentary lifestyle has led to increasing prevalence of disorders and genetic diseases. According to the American Cancer Society, around 1.7 billion patients in U.S. were diagnosed with cancer in 2019. Technological advancements and rising healthcare expenditure will further drive the U.S. genetic testing market over the coming years.

Genetic testing is also known as DNA testing is useful for analysis of metabolites, chromosomes and proteins useful in early detection of heritable diseases such as mutations, disease related phenotypes, genotypes and karyotypes. The genetic testing began in 1950’s with counting the number of chromosomes per cell but the results were not certain. Later in 1970s with advancements there was introduction of chromosome banding. This procedure involves detailed analysis of chromosome structure and diagnosis of genetic disorders. This has helped genetic testing expand in field of molecular genetics and genomics. Lately with advancement there are around 75,000 genetic tests in 2017. Recently biochip and chromosomal & molecular microarray has helped to grow the demand of genetic testing in market. Growing inclination towards genetic testing will offer several growth opportunities in the industry during coming future.

Get this research report on North America Genetic Testing Market customized according to your business requirements.