North America Air Defense System Market Value is estimated to be over USD 4 billion in 2018 and is expected to register lucrative growth between 2019 and 2026 with a CAGR of over 2%. 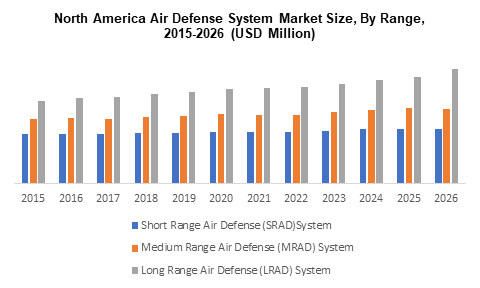 The market growth of North America air defense system can be attributed to the rise in military expenditure of the U.S. Introduction of new, technologically advanced defense system along with aging existing system will also positively impact the market over the coming years. For instance, in 2019, the U.S. allocated a defense budget of USD 717 billion, which was 4.9% more compared to the previous years. This makes U.S. the top defense spender across the globe. Significant amount from this budget will be allocated to modernization and acquisition of ballistic missile defense system.

The rise in political insurgencies between the U.S., Russia, and China will also positively impact the market growth. The U.S. is keeping an eagle eye on armed forces of these countries and is making upgrades in its defense systems accordingly. For instance, China plans to increase its navy fleet by 420 vessels by the end of 2035. In response to this, the U.S. is planning to increase its naval interceptor missiles acquisition to 25 LRASM per year till 2020, accounting for 85 missiles. Along with that, the U.S. is also planning to acquire another 210 missiles till 2025.

The Long-Range Air Defense System (LRAD) segment in the market will capture maximum market share of over 46% in 2026 due to increasing demand for threat mitigation from long-range ballistic missiles. The rise in political insurgencies between geographically apart countries including Russia and China is increasing the chances of long-range ballistic missiles attacks. To avoid such threats, North America is shifting its investment trend and increasingly investing in the acquisition of LRAD.

Industry participants in the market are undergoing long-term collaborations, agreements, mergers, and joint ventures to mitigate market competitiveness and safeguard their market share. Technological advancement is also one of the major aspects providing a competitive edge to the industry players. For instance, in June 2019, L3 Technologies and Harris Corporation merged to form L3Harris. The merger allowed industry players to secure their position in the top 10 defense companies of North America. The merger also allowed L3Harris to create a monopolistic environment in the defense segment, elevating suppliers’ power within the industry.

Get this research report on North America Air Defense System Market customized according to your business requirements.