Asia Pacific Air Defense System Market Share is estimated to be over USD 9 billion in 2018 and is expected to register lucrative growth between 2019 and 2026 with a CAGR of over 3%. 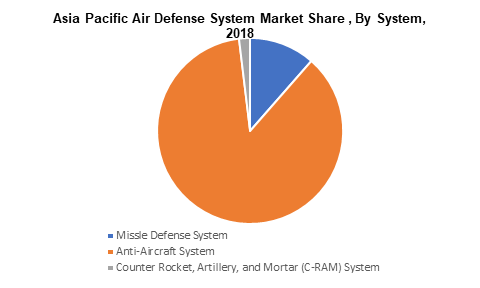 Industry participants in air defense system industry are expected to undergo mergers & acquisitions and offer contracts that will provide systems with enhanced capability across the globe. For instance, in February 2019, the Australian Department of Defense’s Capability Acquisition Sustainment Group signed a strategic contract with Saab AB that will provide enhanced Wireless Audio-Visual Emergency System (WAVES) equipment. This equipment will be installed in the Australian Army’s C-RAM system, further strengthening the customer base.

The fire control system segment is projected to account for majority share of over 45% in the market by 2026. The rise of the segment is attributed to higher adoption in naval, land, and airborne applications. The systems are incorporated in launchers that include missile launch, automatic grenades, mortar launch, and torpedo launch. The industry players are engaged in acquiring contracts that will provide fire control radars with enhanced capabilities, supporting the revenue growth over the coming years. For instance, in October 2018, Israel Aerospace Industries signed a strategic contract worth USD 550 million with the army of an Asian country. The contract states to supply Sky Capture system that includes advanced fire control & detection radars and electro-optical sensors over the coming years.

China holds over 30% of the market share in 2018 and is expected to grow at a CAGR of over 4%. The rise in trade relationships is playing a significant role across the region. The rise in trade between China and Russia will give economic independence to China and significantly reduce its dependence on the U.S. For instance, in April 2019, Russia started to deliver a second set of S-400 air defense system regiment to China and is expected to begin the delivery process by late July.

Get this research report on APAC Air Defense System Market customized according to your business requirements.