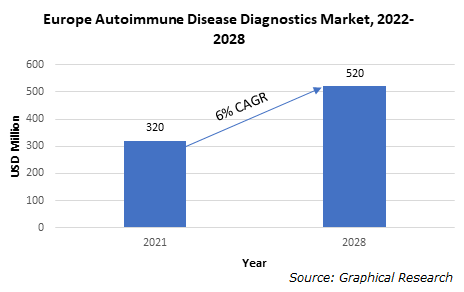 Rising prevalence of autoimmune diseases such as rheumatoid arthritis, systemic lupus erythematosus, type 1 diabetes mellitus, multiple sclerosis, grave’s disease are a few diseases that will drive the market growth in the region positively. According to the recently published article, approximately 5% to 10% population is affected with autoimmune diseases in Europe. According to the article published in British Society for Immunology, in 2018, rapidly rising rates of autoimmune conditions is costing significant amount to the UK each year. The direct and indirect cost to the UK for three autoimmune conditions alone such as type 1 diabetes, multiple sclerosis and rheumatoid arthritis add up to more than USD 17 billion each year. Moreover, there are around 4 million people in the UK living with at least one autoimmune condition. Hence, this substantial increase in prevalence leads to higher demand for early diagnosis and treatment that further stimulate market growth in the future.

Rising awareness among patients pertaining to the autoimmune diseases is one of the major drivers for the regional market growth. Increase in funding and grants from the government along with various national campaigns for raising public awareness in UK is another factor assisting regional growth. For instance, the campaign initiated by Rheumatology Futures Project Group and funded by Arthritis Research UK and NRAS for raising awareness among people for the early symptoms of arthritis will further propel market growth in the region. Moreover, development of The European Autoimmunity Standardization Initiative (EASI) with a purpose of improving the diagnostics in rheumatic inflammatory disorders and strengthening the collaborations between clinics and laboratory scientists will further enhance regional growth in the upcoming years. Hence, owing to these programs the market is expected to witness an upsurge in the forecast period.

Uk autoimmune disease diagnostics market recorded USD 519.4 million revenue size in 2019. The high disease burden in the UK is boosting research and development activities pertaining to the early diagnosis. This in turn would offer better ways of treating autoimmune diseases rendering significant positive impact on regional growth. In 2014-2015 National Institute for Health Research working under Department of Health allocated USD 44.2 million for research pertaining to the inflammatory and immune disease related research. The research will enable better understanding along with early diagnosis of the disease. Hence, owing to these factors the UK autoimmune disease diagnostics market will witness the substantial growth over the forecast timeframe.

Autoimmune disease diagnostics industry started its evolution during the mid 20th century. Scientist and doctors across the globe acknowledged the existence of autoimmune diseases during the 20th century. During the initial years of the century autoimmune disease was viewed as biologically unbelievable. The discoveries of allergy and anaphylaxis were the first clues that provided the information to the scientists that immune system was capable of self-harm. Subsequent advancements and development of the product led to the testing for the presence of anti-nuclear antibodies in the diagnosis of autoimmune disorders such as systemic lupus erythematosus and other systemic autoimmune rheumatic diseases (SARD). Large number of industry players in the U.S. such as Abbott Laboratories, Beckman Coulter, Inc., Bio-Rad Laboratories, Hemagen Diagnostics, Inova Diagnostics, Inc., Quest Diagnostics, SQI diagnostics, F. Hoffmann-La Roche Ltd, Siemens Healthineers, and Crescendo Bioscience, Inc. entered autoimmune disease diagnostics market that increased industry rivalry. Currently, countries in the region are implementing initiatives to control and reduce the burden of  autoimmune disorders. Hence, increasing number of population affected with autoimmune diseases will augment the demand and development of industry in the forthcoming years.

Get this research report on Europe Autoimmune Disease Diagnostics Market customized according to your business requirements.