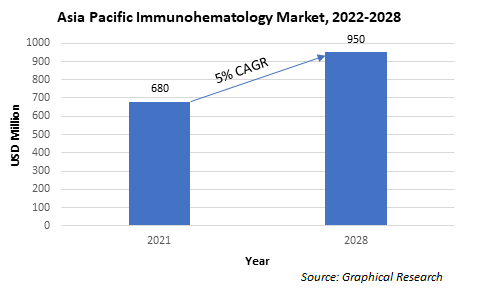 The rise in incidences of diabetes coupled with the growing geriatric population susceptible to cardiovascular diseases will aid in supplementing the market growth. For instance, according to the China’s Office of National Working Commission on Aging, as of 2018 there are around 1.39 billion individuals aged over 60 and the number is expected to reach 1.6 billion by 2033.

In addition, China and India is depicted as the diabetes hub. In India the diabetes population is predicted to reach 70 million individuals by 2025 and around 80 million by the end of 2030. Also, diabetes has become one of the leading cause of cardiovascular diseases and blindness across India.

Reagents segment was valued at USD 341.9 million revenue in 2018. The major factor driving the immunohematology market growth is the increasing blood related ailments in the Asia Pacific region. This will result in the increased adoption of reagents in healthcare settings such as hospitals and clinics for increased blood testing.

Gel cards accounted for a share of about 31% in 2018. Gel cards have varied benefits over traditional saline tubes such as they are less time consuming, more sensitive, fully recordable and more stable for long time duration. In addition, gel cards are regularly utilized for detecting potentially significant antibodies. Thus, owing to such advantages, gel card segment is expected to grow with a higher CAGR during the forecast period.

Asia Pacific Market, By End Use

Hospitals segment is expected to reach USD 467.7 million by 2026. This is mainly due to the increased utilization of immunohematology products such as analysers and reagents for blood testing. Also, the growing prevalence of blood disorders coupled with the rising diabetes population will further drive the growth of market.

Japan immunohematology market recorded a USD 128.1 million revenue size in 2018. This is mainly due to the increased utilization of immunohematology products to meet the rising need for blood testing. In Japan, according to the Japanese Ministry of Health Labour and Welfare, cardiovascular diseases (CVD) are the major factors contributing to the overall deaths in Japan. CVD contributes to about 20% of the total medical expenditure.

Some of the major industry players involved in the market include Abbott, Becton Dickinson, Bio Rad Laboratories, F. Hoffmann-La Roche Ltd and Hologic among other players. Companies are adopting various strategies to expand their presence and offerings. For instance, in June 2018, Abbott announced about its FDA approval for Abbott RealTime IDH2 laboratory test to detect the presence of mutations in the isocitrate dehydrogenase-2 gene in blood and bone marrow of patients with acute myeloid leukaemia. These innovative testing solutions will help in expanding its product portfolio. The move will help in increasing company’s business revenue.

Immunohematology is a division of the medical science that deals with connections of the immune system and blood. It deals with the recognition of blood cells antigens as well as related antibodies. The invention of immunohematology principles in the early 20th century has broken down the immune hurdle of the blood transfusion. This has also facilitated the advancement in the transfusion medicine as well as in all other medical specialties that requires the transfusion support. Regular use of immunohematology tests provides assurance of matching blood transfusions and for the monitoring, diagnostics and treatment of alloimmune and autoimmune cytopenia. Currently, more than 300 red cell antigens have been identified together with lots of leucocyte and thrombocyte antigens.

What are the Growth Projections for Asia Pacific Immunohematology Market?
Asia Pacific Immunohematology Market Value was valued at USD 514.4 million in 2018 and is expected to witness 6.5% CAGR from 2019 to 2026.
Which are the Key Players involved in the market?
Some of the major industry players involved in the market include Abbott, Becton Dickinson, Bio Rad Laboratories, F. Hoffmann-La Roche Ltd and Hologic among other players.
What will be Valuation of Hospitals segment by 2026?
Hospitals segment is expected to reach USD 467.7 million by 2026.

Get this research report on APAC Immunohematology Market customized according to your business requirements.