Europe Aerospace Avionics Market Share is estimated to be over USD 20 billion in 2018 and is expected to register a lucrative growth between 2019 and 2025 with a CAGR of over 3%. 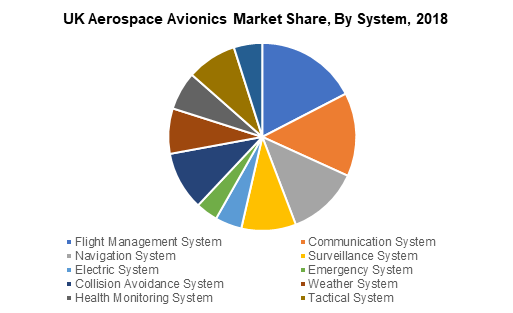 The Europe Aerospace Avionics Market Growth is attributed to the proactive participation of European countries in the aerospace vertical. Europe has stationed itself as a business hub for aviation technologies by organizing frequent business exhibitions and meetings. For instance, in May 2019, Europe hosted Helicopter Technology Central and Eastern Europe 2019 Conference with the propaganda to enhance its technical expertise in the helicopter avionics vertical. Such initiatives allow Europe to gauge its market potential and take strategic actions.

The surveillance system in the Aerospace Avionics market is slated to witness the maximum growth potential with a CAGR of over 4%. The growth can be attributed to changes in the European Aviation Safety Agency’s (EASA) airworthiness regulations. For instance, as of June 2020, all aircraft weighing more than 5,700 kgs and cruise speed greater than 250 knots need to be integrated with ADS-B capabilities to operate in European air space.

The navigation system in the market will demonstrate a major market share of over 12% by 2025 due to the rising efforts of European countries to improve their aircraft navigation systems. Industry players along with government agencies are taking efforts to upgrade existing aircraft navigation systems by establishing various navigation procedures. For instance, in February 2017, 95 European Geostationary Navigation Overlay Service (EGNOS) went live providing 40 reference stations in more than 20 countries across Europe. The EGNOS receives GPS signals from a satellite which is then transferred to Master Control Centers (MCCs)

The UK held a share of over 14% in the aerospace avionics market in 2018 due to the efforts of the government to involve major industry players to propel the avionics market. For instance, in August 2019, Cobham Plc received a contract worth USD 78 million to provide aircraft radio to the UK emergency service network. The upgraded system offers mission-critical push-to-talk voice with high-speed data services over LTE for all UK police & air ambulance aircraft and is forecast to be completed by 2022.

Industry participants in the market are engaged in upgrading their existing product offerings to improve their market share. For instance, in July 2019, Garmin updated its pilot application that provides several advanced features such as Pre-Departure Clearance (PDC), route optimization, and electronic Advanced Passenger Information System (eAPIS). This new upgrade entirely focuses on enhancing the pilots’ experience by providing detailed information about the region’s airspace. Such improvement in the aerospace segment will propel the market growth of Europe; For instance, Europe witnessed a brownfield investment of USD 3.72 billion between 2018 and 2019 for the enhancement of aviation capabilities. Major industry participants include Rolls-Royce, Safran, Leonardo S.p.A., Airbus, Chobham PLC, Thales Group, and Dassault Aviation SA.

Get this research report on Europe Aerospace Avionics Market customized according to your business requirements.