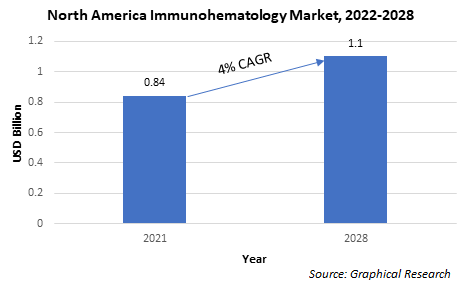 Increase in investment from private & public organizations for constructing blood banks coupled with the technological advancements will aid in supplementing the market growth. For instance, according to The American National Red Cross organisation, about 6.8 million individuals donate blood in the U.S. per year.

Also, the increasing prevalence of blood disorders such as anemia, rae genetic disorders, sickle cell anemia and HIV among other indications will further aid in augmenting the market. According to the WHO, around 1.62 billion individuals are affected by anemia and 37.9 million individuals are affected by HIV globally as of 2018. Such increasing cases of blood disorders around the globe will create lucrative opportunities in the market, thereby driving the market growth.

Analyzers segment held USD 243.9 million revenue size in 2018. This is due to the increasing demand for technologically advanced analyzers for testing blood for various disorders. Automated analyzers minimizes the need for manual intervention, thus saving time and eliminating errors related to cell recognition such as differentiating lymphocytes from monocytes. Also, utilizing analyzers will further reduce the cost of conducting examinations, there by driving the growth of the market in the coming years.

Biochips segmented is expected to grow with a considerable CAGR of 5.6% during the forecast period. This is due to the advantages offered by biochips which includes simultaneous qualitative or qualitative detection of varied range of analytes from one sample. In addition, biochips are increasingly utilized for testing biochemical, toxicological, and protein research for fast detection of chemical agents.

North America Market, By End Use

The increase in various blood disorders such as HIV, anaemia, lymphoma, leukaemia, and myeloma as well as the need for testing blood will create an increasing demand for diagnostic laboratories, thereby boosting the market growth. Thus, owing to the increasing need, diagnostic laboratories are expected to witness a significant growth of 5.8% CAGR during the analysis period.

Some of the major industry players involved in North America immunohematology market include Abbott, Hologic, Beckman Coulter, Siemens Healthcare GmbH and Thermo Fisher Scientific among others. Firms are adopting various strategies such as novel product launches as well as are engaging in partnership to expand their product offerings. For instance, in January 2019, Beckman Coulter had announced the launch of its next generation automated microplate system for processing large amount of blood sample volumes. This launch will aid in expanding its present clinical diagnostic product and solutions.

In 1492 the first blood transfusion was recorded. Immunohematology industry started its evolution in the 1970s when ideologies of immunohematology were presented. Immunohematology is a branch of haematology which deals with the antigen-antibody analogous phenomena and reactions which further relates to clinical manifestations and pathogenesis. The period of blood transfusion began when William Harvey termed the flow of blood in 1616. Richard Lower an English physiologist successfully conducted the first animal-to-animal blood transfusion in 1665 that kept bleeding dogs alive by transfusing blood from additional dogs. However, owing to many negative outcomes, blood transfusions were banned from 1667 to 1818. This was because most of the times transfusion led to negative outcomes even in the same species. This was rectified in 1900 when Karl Landsteiner had discovered the ABO blood groups and introduced the immunological era. Thus, it became clear that the incompatibility of blood transfusions was due to the presence of specific factors present in red cells which were further known as antigens. This resulted in the development of many non-profit organizations and institutions for spreading awareness regarding immunohematology. Thus, the North America immunohematology market share is expected to gain traction during the forecast period due to the launch of novel products as well as favourable regulatory scenario in North America.

Get this research report on North America Immunohematology Market customized according to your business requirements.