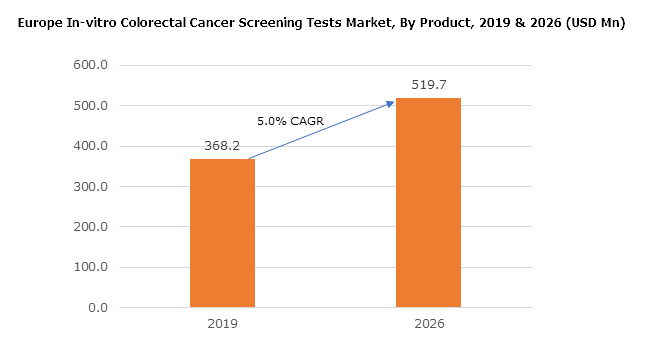 Increasing incidences of colon and rectal cancer will supplement the growth of in-vitro colorectal cancer screening tests in Europe. According to the WHO, around 471,000 new cases of colorectal cancer were recorded in the European region. The Council of European Union had issued recommendations for screening programs to serve as a basis for European guidelines for CRC screening. Factors such as changing lifestyles, rising awareness and improved access to medical devices have increased the disease diagnosis rate in the Euroepan region. Further, improved survival rate and reduction in the overall patient treatment will fuel the market growth.

Fecal occult blood test (FOBT) segment held over USD 310.5 million revenue size in 2019. The increased demand for FOBT test is due to its non-invasiveness and inexpensiveness compared to other test types. The FOBT segment is further classified into guaiac FOB stool test, Immuno-FOB agglutination, Lateral Flow Immuno-FOB test, and Immuno-FOB ELISA tests. The Immuno-FOB agglutination and Immuno-FOB ELISA tests are the largest market in FOBT tests. The improved clinical performance of these tests compels the market growth in the European region.

Evolution of in-vitro colorectal cancer screening industry began during the 2000s. In the 1980s and 1990s, FOBT and sigmoidoscopy were the most used screening tests for colorectal cancer. However, since 2000, most colorectal screening tests in Europe shifted towards colonoscopy. The recent data examining the incidence of colorectal cancer has observed a significant drop in the mortaility rate with the introduction of these screening programs. Endoscopic and FOBT testing methods are the major screening approaches adopted for identifying the presence of colorectal cancer. Expansion of clinically valuable fecal DNA test,  assays with improved diagnostic sensitivity, and the identification of specific and broadly informative molecular markers are among the few technological advancement in the market. However, increasing incidence of colon and rectal cancer, growing longevity coupled with lifestyle changes such as lack of physical exercise and poor diet fuel the market growth in the forthcoming years.

Get this research report on Europe In-vitro Colorectal Cancer Screening Tests Market customized according to your business requirements.