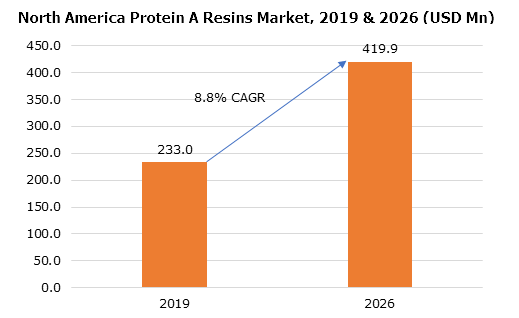 Growth in spending on research and development activities for new drug development will increase the demand of protein A resins in the region. Adoption of chromatography using protein A resin has been used for capturing monoclonal antibodies (mAb) in most of the drug discovery and approval procedures. Developments in protein A during the past years such as increasing its productivity, capacity, and operational velocity has further increased its use in drug development. Additionally, with expanding number of people suffering from chronic diseases, investment in drug discovery will subsequently rise, thereby augmenting the market size.

Rising use of chromatography techniques in chemical and biological disciplines will stimulate North America protein A resins industry growth. Chromatography is commonly used in identification of chemicals and biochemicals and for the separating biological compounds. Due to broad range of benefits offered by chromatography as compared to conventional techniques, its adoption is increasing rapidly. Protein A resin is the most regularly used affinity resin for biomanufacturing and has become the standard technique for capturing recombinant mAb. High superiority and reliability of chromatography will thus drive protein A resins market size in the forthcoming years.

Based on matrix type, the segments analyzed in this report include Agarose-based matrix, Glass or silica gel-based matrix and organic polymer-based matrix. Agarose-based matrix segment held more than 80% revenue share in 2019. Cross-linked agarose is very popular matrix due to its favourable pH range. Agarose beads are prone to pressure and absolute to robust support, such as silica, polystyrene and other highly cross-linked materials. This media meets the standards for laboratory as well as large-scale applications. Such benefits will aid in robust segmental growth.

U.S. protein A resins market accounted for about 85% revenue share of the North American Protein A Resins market in 2019. Increasing technological developments and huge R&D in genomic studies will provide considerable traction to market growth. Also, several initiatives by the scientific associations and institutes to ensure effective manufacturing of protein therapeutics will impe the market growth in the country.

Some of the major industry players involved in North America protein A resins market include GE Healthcare, Thermo Fisher Scientific, EMD Millipore, and Bio-Rad Laboratories among other market players. These companies are adopting strategies such as product differentiation and launch to garner significant market share in the industry. For instance, in September 2017, GE hEalthcare announced the introduction of a novel protein A resin, MabSelect PrismA. The launch aimed at expansing the firm’s business and customer base.

Protein A resins have been developed continuously since the past forty years. Orthoclone, that was the first therapeutic antibody, utilized Protein A chromatography for its purification more than 30 years ago. Protein A was later used for capturing monoclonal antibodies in most  of FDA submissions. sSingificant advances have been made in protein A resins by established players and new entrants since its introduction. They have now become the golden standard for mAb purification and has grown remarkably due to its exceptional performance and capacities. Variations of Protein A ligands and alternatives including monolith membranes and microshperes were also verified to improve purification performance. With continuously increasing number of biotechnology firms, the adoption of chromatography and thus protein A resins will grow rapidly in the foreseeable future.

Get this research report on North America Protein A Resins Market customized according to your business requirements.