North America Autoimmune Disease Diagnostics Market share was valued at USD 5.5 billion in 2019 and is expected to witness 2.3% CAGR from 2020 to 2026. 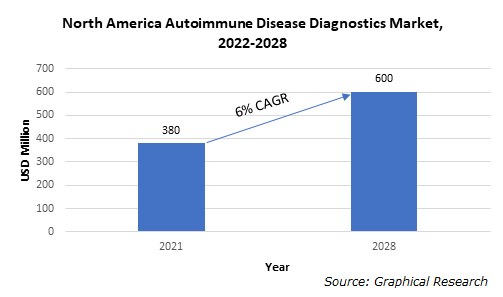 Growing prevalence of autoimmune diseases such as type 1 diabetes mellitus, systemic lupus erythematosus, multiple sclerosis, grave’s disease, rheumatoid arthritis are a few diseases that will drive the market growth in the region positively. According to the National Institutes of Health, in 2017, around 23.5 million Americans were suffering from an autoimmune disease and the prevalence of autoimmune diseases is continously rising in the U.S. In addition, autoimmune diseases are considered as the second leading cause of chronic illnesses and thereby, causes a significant amount of financial burden on the healthcare providers and the government. Hence, this substantial increase in prevalence leads to higher demand for early diagnosis and treatment that further stimulate market growth in the future.

Rising awareness among patients pertaining to the autoimmune diseases is one of the major drivers for the regional market growth. The American Autoimmune Related Diseases Association (AARDA) has started the initiative of educating the public on prevalence rate, risk factors, and severe lack of awareness surrounding autoimmune diseases. AARDA launched several national awareness campaign related to autoimmune diseases to combat the lack of information associated with these diseases. That in turn, forms a significant factor for the high death rate and delayed diagnosis leading to increased financial burden. Furthermore, AARDA announced March as the National Autoimmune Disease Awareness Month. It launched the new media public service campaign (PSA) to encourage patients and create awareness among public about the 100 known autoimmune disorders. Hence, owing to these programs the market is expected to witness an upsurge in the coming years.

U.S. autoimmune disease diagnostics market recorded USD 4.9 billion revenue size in 2019. The increasing prevalence and high disease burden in the united states is boosting research and development activities pertaining to the early diagnosis and better ways of treating autoimmune diseases rendering significant positive impact on regional growth. Furthermore, the adoption rates for lab automation technology is high in the region and its demand is increasing as automation will significantly reduce human errors in the diagnosis thereby increasing accuracy in detecting the disease.  Hence, owing to these factors the U.S. autoimmune disease diagnostics market will witness the substantial growth over the forecast timeframe.

Get this research report on North America Autoimmune Disease Diagnostics Market customized according to your business requirements.