Polymers and engineered materials have started dominating various end-use industries across the region in the past few years. Their wide-ranging applications will support the industry expansion. Growing preference for plastic materials in various end-use industries, especially in the automotive sector. Materials made with POM help in enhancing the vehicle’s functionality and visual appeal, while reducing their overall fuel consumption and weight. 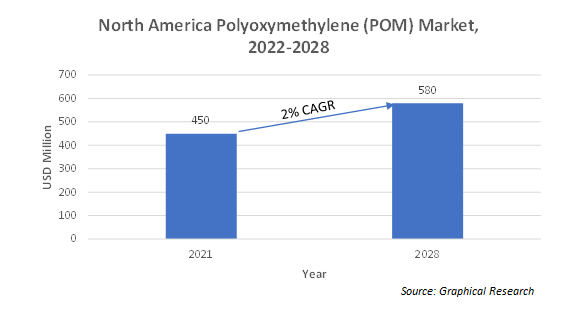 Polyacetal resins are also anticipated to replace aluminum, brass, die-cast zinc, steel, and numerous other metals in various end-use applications. One of the major reasons for this is the growing use of POM resins in manufacturing gears and bearings. The region’s automobile sector is likely to increase its dependence on engineered plastics to make the vehicles more lightweight, while decreasing their fuel consumption.

However, plastic waste is starting to attract a lot of public attention, specifically due to the mounting concerns regarding marine pollution. This has become a major issue because plastics clustered on the surface of waterbodies can penetrate the food chain, causing several chronic diseases in animals and humans.

The COVID-19 pandemic had a severe impact on North America polyoxymethylene market outlook because several industries that use this thermoplastic were forced to temporarily shut down their operations. Since automotive and industrial sectors were among the worst affected during this period, the demand for POM also witnessed a major slump. However, with these industries recommencing operations post the pandemic era, the product consumption rate will improve considerably.

The impact modified POM grade segment will capture a sizeable market share by 2028. The region’s automotive sector is expanding at a notable rate, thereby fueling the requirement for high-precision components. Impact modified POM grade is useful in the injection molding process to produce these critical parts in vehicles. This grade can greatly increase the overall impact strength and toughness of the auto parts.

The North America polyoxymethylene market size from the homopolymer (H-POM) segment will reach USD 100 million revenue by 2028. When compared with its counterpart C-POM, H-POM has greater hardness, density, and strength because of its superior crystallinity. It also has a variety of uses in automotive, food & beverage, engineering, and electrotechnical sectors, making it one of the most versatile thermoplastics.

Advanced processes like injection molding are becoming popular among automakers due to the ease they offer in making complex vehicle components. Thermoplastics like H-POM are being widely used in the automotive sector because it acts as an ideal alternative for metal-based parts because of its high wear resistance, great fatigue endurance, and lightweight characteristics. Since automakers are constantly looking for ways to reduce their product’s weight, H-POM can be used to produce lighter yet longer lasting parts.

Get this research report on North America Polyoxymethylene Market customized according to your business requirements.