North America Enterprise Networking Market is estimated to be over USD 25 billion in 2017 and is expected to show lucrative growth with a CAGR of over 3% from 2018 to 2024. 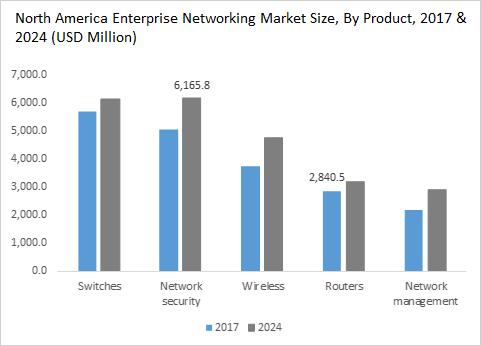 The service segment is expected to grow at CAGR of over 6% during the forecast period due to the adoption of network maintenance & integration services by enterprises. The rising network virtualization is enabling enterprises to integrate network devices into the virtualized environment. Enterprises are currently focusing on training their resources for deploying and managing complex network systems. Many solution providers are associating with training partners in various regions to allow their customers to conveniently access the training services. Enterprises are emphasizing on using managed services to focus on their core competencies.

The U.S. held a major share of over 70% in 2017 due to the increase in the number of cyberattacks on defense agencies and banking institutions. For instance, in 2017, Equifax, a consumer credit reporting agency, suffered a data breach that exposed the personal data of 145 million people including social security members. The increase in cyberthreats is enabling enterprises to deploy a robust solution to protect their IT infrastructure.

How much did North America Enterprise Networking Market value in 2017?
North America Enterprise Networking Market is estimated to be over USD 25 billion in 2017
Which are the major companies forming the competitive landscape?
The major players operating in the North American enterprise networking market are Checkpoint, Cisco, Dell Technologies, F5 Networks, Broadcom, FireEye, Arista, HPE, Riverbed, Juniper, Extreme Networks, McAfee, Netscout, Symantec, Huawei, Trend Micro, Palo Alto, Fortinet, and VMWare.
Which country is expected to have highest growth rate in the market?
Canada is expected to have the highest growth rate of 6% over the forecast period due to the adoption of cloud services across the enterprises.

Get this research report on North America Enterprise Networking Market customized according to your business requirements.