Europe Enterprise Networking Market is estimated to be over USD 20 billion in 2024 and is expected to grow at a CAGR of over 6% during the forecast period. 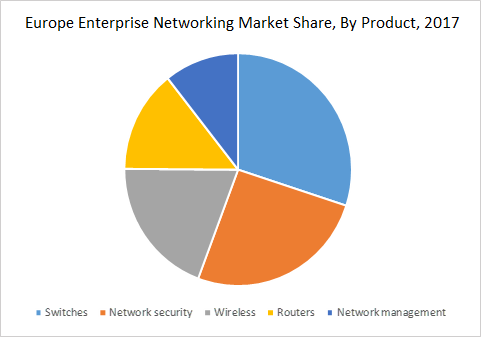 The market growth is attributed to the growing internet penetration in the country. According to the ITU, about 79.6% of the European population used the internet in 2018. The increased cyber threats due to the increased internet penetration are enabling enterprises to deploy advanced networking solutions to protect their network infrastructure. The increase in the adoption of network virtualization across SMEs is another factor contributing significantly to the market growth.

The enterprise networking product segment held a market share of over 70% in 2017 due to the rapid growth of data centers. The enterprises are focusing on enhancing their network efficiency using networking hardware components such as switches and routers. The rise in smartphones and connected devices penetration is further fueling the demand for network device monitoring & management solutions. Major network solution providers are providing advanced network monitoring & management products to match the changing network demands.

The manufacturing segment is expected to show a growth rate of over 8% during the forecast period due to the increase in the adoption of IoT & connected devices across manufacturing facilities. The increased use of networking devices in the manufacturing industry triggers the demand for network security solutions that can protect plant assets with converged-access security products & services.

The companies operating in the Europe enterprise networking market are forming strategic partnerships for improving their network security. For instance, in August 2016, Nokia and Telefonica Germany collaborated to transform fixed & mobile network operations. Under this partnership, Nokia provided managed services to Telefonica’s E-Plus network, simplifying the company’s network operation and backend tasks such as network monitoring and preventive maintenance.

Get this research report on Europe Enterprise Networking Market customized according to your business requirements.