Asia Pacific Enterprise Networking Market is estimated to be over USD 20 billion by 2024 and is expected to grow at a CAGR of 9% over the forecast period. 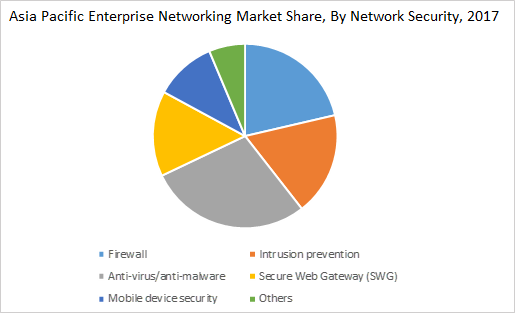 The market growth is attributed to the increase in smartphone penetration in the region. The increased penetration of wireless devices is resulting in the widespread adoption of network virtualization solutions across the region. Government authorities are forming cybersecurity policies to protect the network infrastructure of public sector companies. The growing telecom sector with steps toward the commercialization of the next-generation 5G network is contributing significantly to market growth.

The cloud deployment model is expected to show a growth rate of 10% over the forecast period due to the increase in the demand for robust network infrastructure to match the changing network demands. SMEs are deploying public cloud services due to cost competitiveness in the market. Cloud service providers are offering ‘pay-as-you-use’ model that enables enterprises to manage their network resources cost-effectively.

The IT & telecom segment held a market share of over 30% in 2017 due to the increase in the adoption of network virtualization technologies across enterprises. Currently, the network service providers are using NFV technology to improve operational efficiency and to maintain their complex network setup. The growing adoption of wireless networks across the telecom companies is also contributing significantly to the enterprise networking market growth.

India is expected to have the fastest growth rate of 11% over the forecast period due to the growing IoT and BYOD trends across enterprises. The rising security concern due to the increasing number of wireless devices in the country is enabling enterprises to deploy an advanced networking solution. Government authorities are partnering with major network solution providers to improve cybersecurity across the country. For instance, in January 2018, the Indian government launched the Cyber Surakshit Bharat initiative in partnership with technology companies including Cisco, Deloitte, Ernst & Young, and other organizations such as NASSCOM and FIDO Alliance. The initiative aims to create awareness about cybercrime and to build a robust cyber-security system that keeps all the confidential information protected.

Get this research report on Asia Pacific Enterprise Networking Market customized according to your business requirements.