× Industry Reports Services Press Release Contact us About us
☰

North America Air Compressor Market will be driven by the U.S home appliances industry. The country ranked fourth in the global refrigerator exports with a little less than 7% of the global share. 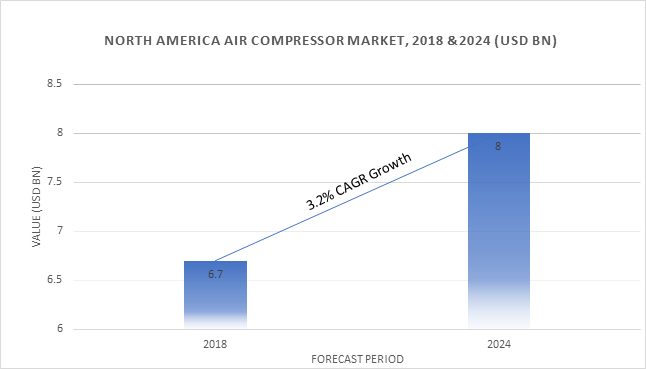 It is also expected to witness growing demand for household portable air compressors for painting, domestic workshops, etc. The U.S. also has many refrigerated warehouses and packaged food industries, which is driving the food & beverage application segment from past several years in the region.

Product is extensively used in the manufacturing of household appliances such as refrigerators, air conditioners, etc. The product is likely to foresee potential increase in demand in the household appliances sector in the U.S. market during the forecast period. According to latest report by The Japan Refrigeration and Air Conditioning Industry Association (JARIA), North America has been the third largest market where air conditioner demand is estimated to increase by 4.9% reaching to approximately 15.3 million units by 2017.

Steady growth in the household appliances consumption in North America will also contribute to the air compressor market development by 2024. The recovery from the economic downturn followed by the U.S. government initiatives toward the creation of jobs are likely to improve the country’s economic conditions and increase the household appliances’ market demand in the future. The primary driver for the growth in the household appliances in the U.S. is advancement in the technology of the appliances such as dishwashers, refrigerators, cooktops, air conditioner, etc. which is further likely to accelerate the air compressor market during the forecast timespan. Furthermore, steadily growing automotive industry in the region is likely to fuel the product demand during the forecast timespan.