Asia Pacific Autonomous Cars Market size in 2017 was assessed to be over 8 million units and is projected to grow at a CAGR of 15% over the forecast period. 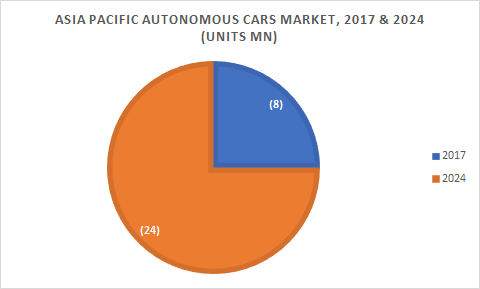 The autonomous cars market in Asia Pacific is growing due to increasing investment by automakers to enhance safety features in the vehicles. With the rise in the number of road accidents, the market for autonomous cars is expected to grow. The tech companies such as Alibaba, Baidu, Didi Chuxing and Softbank are participating in the self-driving cars and is expected to capitalize their vehicles.

The favorable government initiatives in the region is accelerating the growth of autonomous car market. The government in the country of China, Singapore, and Japan are allowing testing of self-driven vehicles on public roads. The testing of self-driving vehicles is expected to help the autonomous market growth. Additionally, the government has implied new regulations for the local authorities to approve the testing of smart internet-connected cars. By 2020, the Australian government will pass national law, although some states have already passed laws to protect their citizens and direct businesses operating in the region.

However, the government regulations in some of the countries hinder the market potential. In countries such as India has banned the self-driving technology as it will reduce the employment in the country. Additionally, the lack of well-maintained infrastructure in the country is an obstacle faced in the implementation of the self-driven cars.

The Internal Combustion Engine (ICE) vehicle market dominates the autonomous cars market in Asia Pacific with a market share of over 90% in 2017. The high demand for ICE is due to the lack of infrastructure availability for the electric vehicle and improved standard of living in the region. Additionally, the increasing pollution, particularly in the metro cities, demands for ICE-based engines.

Some of the major players operating in the autonomous cars market in Asia Pacific are Waymo, Volvo Car Corporation, Ford Motor Company, General Motors Company, Volkswagen Group, Uber Technologies Inc., Toyota Motor Corporation, Tesla Inc., Subaru of America, Inc, Nvidia Corporation, Tencent, Daimler, Baidu, Aptiv PLC, Autoliv Inc. These players are leveraging on the strategy of acquisition and partnership. These players are focusing on acquiring startups to enhance its technological offering and gain competitive edge. For instance, in April 2017, the Baidu acquired XPerception, a start-up who provides computer vision technology. The start-up developed its own module that can be deployed on robotics.