Europe Autonomous Cars Market size in 2017 was assessed to be over 9 million units and is projected to grow at a CAGR of 12% over the forecast period. 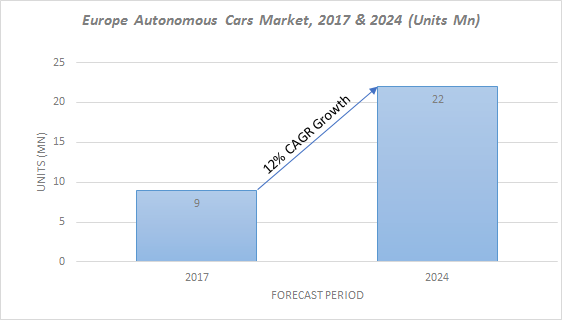 The large number of automakers in the region are increasing the growth of autonomous car market. The automakers are investing in the autonomous technology to enhance the innovation process in self driving vehicle. Additionally, OEMs in the region are making advancement in the automotive LiDAR technology. The companies are forming partnerships with various start-ups to develop customized solutions for their vehicles.

There is high growth potential for the Hybrid Electric Vehicle (HEV) and Battery Electric Vehicle (BEV) in the country of Sweden, Germany, and Netherlands. The country has well maintained infrastructure with publicly-available electric vehicle charging points and a well-established telecom sector. However, other counties in the region limits the growth of electric vehicles due to lack of availability of infrastructure for the implementation of technology and differences in the income level that hampers the sale of electric vehicles.

Get this research report on Europe Autonomous Cars Market customized according to your business requirements.