North America Autonomous Cars Market size in 2017 was assessed to be over 4 million units and is projected to grow at a CAGR of 12% over the forecast period. 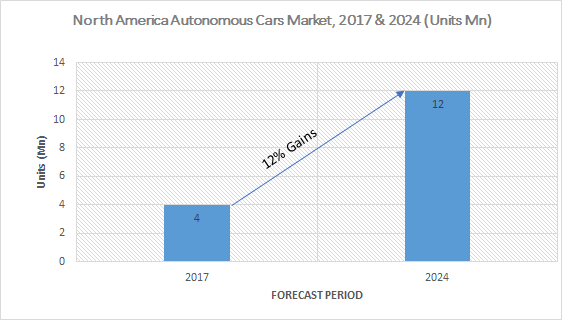 The market is driven by the supportive government initiatives and policies for the self-driving technology. The government has taken favorable initiatives to helps the automakers and tech companies to test their prototypes on public roads easily. Additionally, the government authorities are collaborating with automotive developers to accelerate innovations in the autonomous vehicle landscape.

The market growth is credited to the aggressive R&D activities in the region. The tech giants and autonomous manufactures in the region are developing new R&D centers. Additionally, and rising investment in the auto-tech also promotes the growth of autonomous cars market.

The Internal Combustion Engine (ICE) vehicle market dominates the autonomous cars market in North America with a market share of over 95% in 2017. The growth is due to unavailability of the alternate technology in the vehicle market. Also, lack of infrastructure availability for the new technology has increased the growth of ICE. However, the growth can be hindered in future due to the rising environmental concerns within the people and availability of alternate technology. People are moving towards the hybrid and battery electric vehicle that saves from the hazards caused due to the harmful emission of pollutants from the fossil fuel vehicles and the decreasing level of fossil fuels.

The market is characterized by the presence of various players such as Waymo, Volvo Car Corporation, Ford Motor Company, General Motors Company, Volkswagen Group, Uber Technologies Inc., Toyota Motor Corporation, Tesla Inc., Subaru of America, Inc, Nvidia Corporation, Aptiv PLC, and Autoliv Inc. Major players are leveraging on inorganic growth strategies, such as mergers & acquisitions, to gain market share. For instance, in in February 2017, Ford announced that it would invest USD 1 billion in AI startup Argo over the course of 5 years. Argo will operate as an AI research center for Ford.

Get this research report on North America Autonomous Cars Market customized according to your business requirements.