Germany & United States Non-Alcoholic Beer Market size was valued at over USD 3.5 billion in 2017 and is expected to witness growth of more than 7% CAGR from 2018 to 2024. 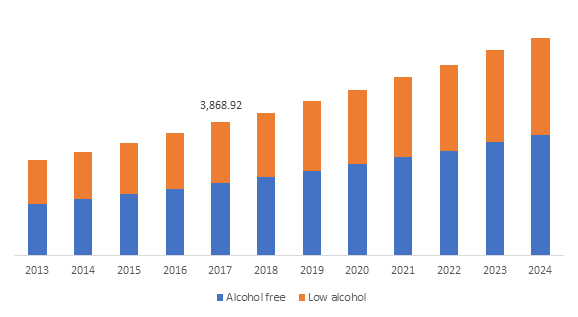 Inclination towards alcohol content reduction due to increasing consumer health consciousness across the world has resulted in increasing non-alcoholic beer penetration. In 2016, Germany, UK, Spain, Poland, France, and Italy were the top beer consuming nations in Europe. However, according to Brewers of Europe, the total beer consumption in Germany observed a significant decline from 86,018 hectolitres in 2015 to 85,532 hectolitres in 2016. Conversely, the non-alcoholic beer market witnessed significant gains in the European market.

Alcohol free segment accounted for the largest revenue size of over USD 2 billion in 2017 owing to the increasing adoption of healthier lifestyles coupled with the benefits of non-alcoholic beer in North America and Europe. Countries with stringent norms are likely to promote alcohol-free beer market. High religious considerations among the Muslim community is fueling the industry growth globally. Increasing product scope & adoption among consumers owing to need for maintaining a social status will supplement the non-alcoholic beer demand. In addition, branding of the product as 0% alcoholic beer will drive the significant business growth.

Malted grains segment accounted for the largest revenue size of over USD 2.5 billion in 2017 owing to the key properties such as improved sweetness, color along with enriched aroma in various blends. In addition, high enzyme concentration leading to efficient starch conversion & enhanced fermentation provides a positive outlook for malted grains including barley. Moreover, non-alcoholic beer accounts for more than 90% of the global market volume across the region which will further augment the business expansion in Germany & United States.

Dealcoholisation segment accounted for the largest revenue size of over USD 3 billion owing to the rising demand for generating natural & stronger blends. The technology includes heat & membrane-based processes such as reverse osmosis, heat treatment methods and vacuum distillation. Reverse osmosis is a preferred and widely used technique, in which beer is passed through a filter to separate the alcohol & water contents. Hence, overall cost reduction in the manufacturing & operating processes will enhance the demand for dealcoholisation technology among the largescale brewers. Ease of convenience & flexibility in obtaining product with alcohol lower than 0.05% ABV will be an impetus for the Germany & United States non-alcoholic beer market growth.

Supermarkets segment accounted for the largest revenue size of over USD 1 billion owing to the improvising trend for buying multiple products from a single location and increasing investments in supermarket chains. Lower product prices & higher discounts in supermarkets benefits is driving the product demand through sales channel in several countries. Moreover, a large variety of size, range, and brand coupled with the rapid urbanization of the cities will further stimulate the business outlook.