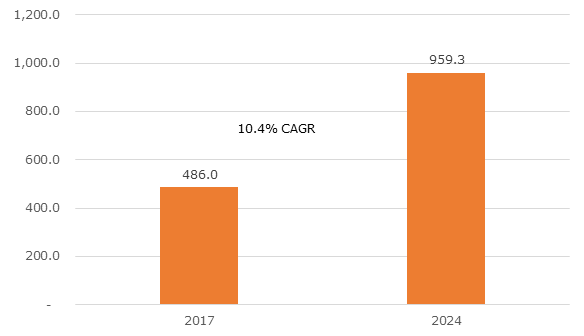 Increasing burden of chronic and infectious diseases is the key factor driving Latin America molecular diagnostics market growth over the forecast period. Elderly people are more susceptible to infectious and chronic diseases due to anatomical and functional changes resulting in impaired immune system. According to United Nations, in Latin America, the population aged 60 years and above accounted for 76 million in 2017 and is expected to reach 198.2 million by 2050. Moreover, the American Academy of Family Physicians (AAFP) states that one third of all deaths among elderly population (aged above 65 years) result from infectious diseases. Such factors will surge the demand for early disease diagnosis thereby augmenting molecular diagnostics business growth.

Furthermore, growing demand for personalized medicines will serve to be another impact rendering factor in industry growth. Advent of technology in disease diagnosis and focus of industry players in developing new molecular diagnostic technologies to deliver faster results with high accuracy and specificity should favour business growth. For instance, evolution of PCR to Real-Time PCR (RT-PCR) has revolutionized detection of DNA and RNA owing to its benefits such as low reagent consumption, real-time method monitoring, automation of workflow as well as greater precision & reproducibility. However, increasing cost of disease diagnosis and lack of uniform regulatory framework may impede Latin America molecular diagnostics industry growth during the analysis period.

Blood screening segment accounted for significant revenue share in 2017 and is poised to witness around 11% CAGR during the forecast period. Increasing adoption of blood screening for detection of mutations in RNA or DNA in case of blood cancers and other diseases will favour segmental growth. Rising prevalence of hematologic malignancies of lymph nodes, bone marrow and blood in the region will surge demand for blood screening thus, propelling business growth.

Oncology testing segment is estimated to exceed USD 135 million by 2024 owing to rising incidence of cancer in the region. Molecular diagnostics have numerous applications in oncology and are widely used for therapy selection, screening, relapse monitoring of cancer, and diagnosis. Segment growth is attributed to increasing demand for personalized medicine, rapid advancements in molecular diagnostics and rising usage of biomarkers in oncology.

In situ hybridization segment was valued around USD 100 million in 2017 and will witness considerable growth in the foreseeable future. In situ hybridization is widely functional as gene mapping for validation and identification of cytogenetic aberrations recognized by comparative genomic hybridization (CGH) in tissue microarray format. Rising usage of in situ hybridization in research activities & laboratories to diagnose chromosomal abnormalities, cancer and infectious diseases will serve to be major drivers augmenting business growth.

Sequencing segment is projected to witness over 14% CAGR during the analysis period owing to technological advances in genetic sequencing. Advent of next-generation sequencing (NGS) technology has condensed sequencing cost and significantly enlarged throughput. Application of NGS to characterize cancer genomes has given rise to discovery of abundant genetic markers for usage in disease diagnosis. Such factors will stimulate segmental growth during the analysis timeframe.

Mexico accounted for more than 15% revenue share in 2017 and is estimated to witness similar growth by 2024. Implementation of various molecular diagnostic tests to detect genetic alterations in numerous types of cancer will fuel industry size in the coming years. Introduction of cost-effective and automated systems with amplification methods to successfully capitalize on market opportunities will positively impact Mexico molecular diagnostics business growth.

Molecular Diagnostics (MDx) is one of the most composite disciplines in modern science. The theoretic gestation of genetics traversed well over 2,000 years, from classical Greek thinkers such as Aristotle and Hippocrates. Advent of cellular biology in 1900s that continued further to modern times witnessed several technological advancement. In the 1950s, RNA and DNA were recognized as the carriers of genetic information in living systems. Prior to introduction of molecular diagnostics in 1980s, clinicians were limited to a generalized approach to diagnosing disease condition and for developing solutions of those health problems. Additionally, in 1980s,  Point of Care (POC) diagnostics was invented, referring to tests that be performed near a patient instead of a laboratory environment. Myriad formed in 1991, was one of the first molecular diagnostics companies that announced the release of the first ever patient-level genetic testing system, BRACAnalysis in 1996. Later, the Human Genome Project was completed in 2003, stimulating greater advances in DNA and RNA sequencing as well as other areas of molecular diagnostics. Molecular diagnostics have made various advances in disease diagnosis over the recent years. Increasing R&D investment and focus of companies on advancement of technology will accelerate the pace of molecular diagnostics industry growth over the coming years.