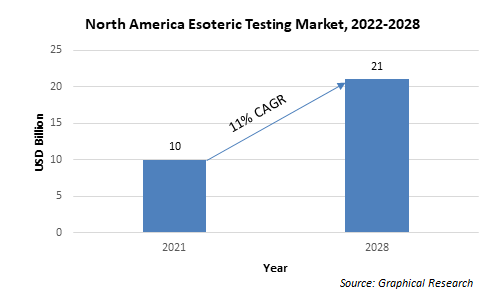 Growing incidence of rare form of diseases will positively influence North America esoteric testing market growth in the foreseeable future. According to the American Cancer Society, about 20% of patients with cancer are diagnosed with a rare cancer form. Thus, growing need regarding diagnosis of rare and complex disorders well before advancement of the disease will lead to increasing demand for esoteric testing in North America over the coming years.

Increasing technological advancements in esoteric testing will offer lucrative market growth potential over the future years. Development and sophistication of laboratory instruments enables delivery of quick and accurate test results with high-end technology. Also, with the use of information technology in laboratories, easy transfer of data is facilitated. Such developments lead to better patient care and cost-effectivity that should lead to significant market growth during the upcoming years.

Infectious disease and immunology esoteric testing market held significant revenue size of USD 2.2 billion in 2018. Rising pervasiveness of infectious diseases in the U.S. will be a major factor impacting segmental growth. For instance, in 2016, there were 9,272 new cases of tuberculosis and 53,850 salmonella cases, as per National Center for Health Statistics. Hence, growing burden of infectious diseases will accelerate the adoption of esoteric testing for better disease diagnosis and treatment in the upcoming period.

ELISA technology market for esoteric testing will foresee momentous segmental growth at 9.8% CAGR over the forecast years. Enzyme-linked immunosorbent assay (ELISA) technology allows testing of a variety of antigens and thus for a broad spectrum of diseases. This technology provides accurate detection of antigens and antibodies owing to its high sensitivity. Thus, growing incidence of rare infectious and genetic disorders will augment adoption of ELISA technology for esoteric testing in the forthcoming years.

Some of the major industry players involved in market include Quest Diagnostics, Laboratory Corporation of America, Opko Health and Myriad Genetics. These firms are adopting inorganic growth strategies such as partnerships and collaborations to gain competitive edge over other market players. For instance, in January 2019, Laboratory Corporation of America announced an extended agreement with Texas Association of Community Health Centers, Inc. for providing enhanced laboratory services to more than one million patients. This strategy will help the firms in expanding their customer base as well as grow financially.

During the past years, occurrence of rare disorders resulted into specialized testing of such diseases, hence leading to commencement of esoteric testing market. Polymerase chain reaction (PCR) technology for detection of human immunodeficiency virus (HIV) was considered esoteric during the past years. However, due to escalation in HIV prevalence, it is no longer considered under esoteric testing label. Meanwhile, large number of laboratories in North America, especially across the U.S., performing esoteric tests emerged due to lack of affordability offered to healthcare facilities including hospitals and clinics by such tests owing to its cost-intensive technology and requirement of highly skilled personnel.

Get this research report on North America Esoteric Testing Market customized according to your business requirements.