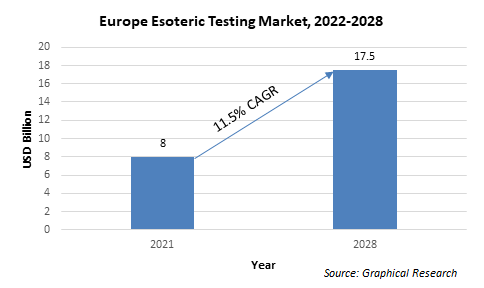 Growing pervasiveness of rare diseases will highly influence Europe esoteric testing market growth in the forthcoming years. As per the International Society for Pharmacoeconomics and Outcomes Research, the prevalence of rare diseases in Germany is nearly 46 per 100,000 people. Thus, growing prevalence of rare and complex disorders should increase the need for disease testing, thereby impelling the demand for esoteric testing in Europe over the upcoming period.

Increasing research and development regarding rare diseases in the European Union will positively impact Europe esoteric testing market growth in the future years. The Orphan Designation Programme was launched in the year 2000 to encourage firms for the development of drugs to treat rare diseases. Since then, several drugs have been developed and marketed across the region. Such efforts will drive the Europe esoteric testing industry growth in the projected period.

Growing demand for genetic testing due to increasing incidence of genetic disorders should expand Europe esoteric testing business size in the foreseeable future. As per EURORDIS, Rare Diseases Europe, more than half of the rare diseases in Europe are genetic in nature. Such diseases are fatal and affects the patient for a long-term. Thus, with changing lifestyle, the incidence of genetic disorders will significantly rise, escalating the adoption of esoteric testing over the forecast years. However, restrictive regulations may hamper market growth to a certain extent.

Oncology esoteric testing market is estimated to progress at 10.5% CAGR over the forecast timeframe. Accelerating prevalence of cancer will offer lucrative segment growth potential in the future years. Growing obesity, exposure to toxic pollutants as well as faltered eating habits will increase the risk of development of cancer. In addition, various funding activities by the European Commission's EU Health Programme for rare cancer projects will highly impact oncology esoteric testing segment growth in the coming years.

ELISA (enzyme-linked immunosorbent assay) esoteric testing technology market accounted for more than 20% market share in 2018. Wide acceptance of this technology for testing due to high specificity and reliability will drive business growth. Broad array of disease testing along with reagents and analytical testing further contributes to higher customer preference for ELISA technology. Moreover, rising investment in research and development of this technology will escalate the adoption of ELISA technology for esoteric testing over the foreseeable future.

Over the past years, emergence of rare diseases led to development of niche testing kits, marking the beginning of esoteric testing industry. Initially, PCR technology for detection of human immunodeficiency virus (HIV) disease was regarded as esoteric test, which is now commonly equipped across the globe. However, surge in incidence of HIV, led to removal of esoteric label from such tests. Currently, many laboratories and firms across Europe are collaborating with healthcare facilities such as hospitals to perform specialized tests that are not affordable to such facilities. In the foreseeable future, rising pervasiveness of rare diseases will provide increased cost-effectivity for esoteric testing, should impel European esoteric testing industry growth over the forecast years.

Get this research report on Europe Esoteric Testing Market customized according to your business requirements.