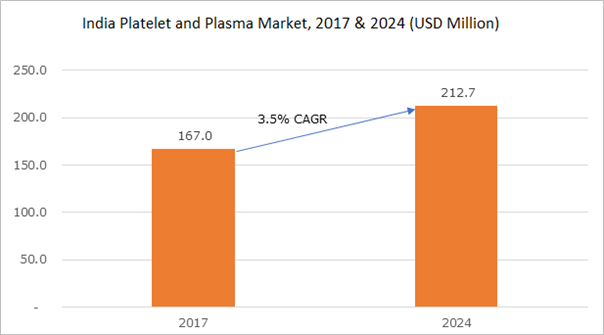 Rapidly growing geriatric population base in India suffering from various chronic disorders including liver and blood related disorders is one of the major factors driving platelet and plasma market growth. As per the World Population Aging Statistics 2017, population aged 60 years or over accounted for 0.1 billion in 2017 and is expected to double by 2050 in India. Thrombocytopenia is one of the common conditions in elderly patients with chronic liver diseases and is characterized by low platelet count. Therefore, increasing number of such patients ultimately surges demand for advanced platelet and plasma therapies that should drive the industry growth in coming years.

Gradual rise in blood transfusion rate in India will foster industry growth over the projected timeframe. According to the Indian Red Cross Society, large number of patients are admitted annually in hospitals due to chronic diseases such as cancer and experience severe loss of platelets. More than 30 million of blood components are transfused each year in India. Above mentioned factor predicted to prove beneficial for the industry growth. However, high procedural cost may restrain the industry growth to some extent.

Platelets segment was valued around USD 111 million and is projected to show robust CAGR during the forthcoming years. Increasing adoption of technologically advanced apheresis devices for transfusion procedures coupled with rising demand for surgical procedures will drive the segmental growth over the coming years. Platelets are widely used in various surgical procedures owing to its ranging prophylactic as well as therapeutic benefits that should positively impact the segmental growth.

Plasma segment is poised to experience 3.1% CAGR over the analysis timeline. Rising prevalence of rare chronic diseases including autoimmune diseases, haemophilia, hereditary angioedema and other infectious diseases will drive segmental growth over the forecast period. Plasma can be used as the only therapeutic strategy available for treatment of certain diseases in case of unavailability of vaccines, drugs or other specific treatments that boosts the segment growth.

Thrombocytopenia segment is forecasted to witness 4% growth over the forecast timeframe. Thrombocytopenia is a blood disorder caused due to shortage of platelets in case of severe blood loss. Increasing accidental injuries such as traumatic brain injury or haemorrhage will affect clotting mechanism of the body, thereby reducing the number of platelets. This increase demand for PRP therapies. Also, several infectious diseases result in low platelet count that escalates the segmental growth.

Hospitals segment held more than 62% revenue share in 2017 due to availability of well-established hospitals coupled with rising healthcare coverage in the country. Furthermore, increasing number of surgeries requiring blood transfusion are being performed in hospital settings well-equipped with sophisticated instruments that should foster the segment growth.

Ambulatory surgical centres segment is expected to witness 3.7% growth over the analysis period. Segmental growth is attributed to increasing preference of geriatric population for outpatient surgeries as these surgeries are cost-effective. Moreover, blood transfusion in the condition of anaemia, thalassemia, haemophilia, and other blood disorder can be performed efficiently in ambulatory centres. Aforementioned factors are projected to drive the segmental growth.

Platelet and Plasma industry can be traced back to 1970’s. This concept received momentum after its extensive usage in blood transfusions to treat patients with thrombocytopenia. After a decade, preference for PRP grew in maxillofacial surgery. Subsequently, platelets and plasma have been regular utilized in treating people suffering from musculoskeletal injuries. India platelet and plasma industry is currently in developing phase and is yet to witness numerous growth opportunities. Key players having a strong foothold in India introduce innovations and automations in the apheresis devices that facilitates the transfusion procedures. Thus, with advent of technology this industry is projected to grow at significant rate during the forecast years.