North America Robot Sensor Market size exceeded USD 700 million in 2019 and is anticipated to register a growth rate of 12% between 200 and 2026.

The North American robot sensors industry growth is owing to the extensive adoption of medical robots in the region. According to the October 2020 press release by the International Federation of Robotics, medical service robot sales witnessed double-digit growth, an increase by 28% in 2019. Around 90% of medical robot suppliers are from North America and Europe. 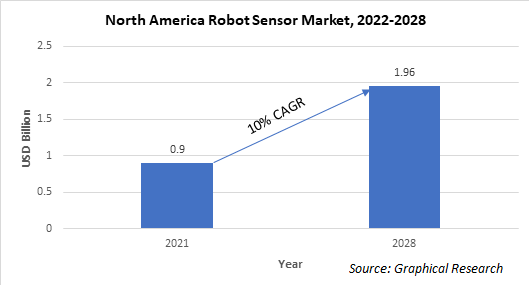 Medical robots, such as surgical medical robots, rehabilitation robots, non-invasive radiosurgery robots, etc., assist medical professionals by providing high precision and accuracy in surgeries. According to the June 2020 press release by the Association of American Medical College, the U.S. is projected to face a scarcity of surgeons of around 54,100 to 139,000 physicians by the end of 2033.

The ultrasonic sensor segment accounted a market share of over 10% in 2019 and is estimated to witness over 9.5% CAGR from 2020 to 2026. Growth is credited to the increasing adoption of these sensors in automated assembly lines, robotic grippers, and Automated Guided Vehicles (AGVs) in the industrial sector.

The logistics application segment held a market share of around 15% in 2019 and is projected to register exponential growth of 13.5% till 2026. The growing e-commerce sector across the U.S. and Canada is one of the major factors increasing the adoption of robot sensors in the logistics sector. Amazon, Alibaba, and Walmart are some of the major e-commerce players to deploy robots in their factories for assembly, packaging, pick, and place applications, among others. In January 2020, Amazon announced that it has deployed around 200,000 logistics robots in its warehouses in the U.S. The company is highly focused on research & development activities to introduce robots that will deliver products in the future.

The U.S. is expected to dominate the North America robot sensor market share during the forecast timeline attributed to the rising U.S. government spending on the defense sector. In February 2020, the U.S. President and the U.S. Congress proposed the FY2021 budget with an estimate of USD 740.5 billion on national security of which USD 704.5 billion will be accounted for the Department of Defense (DoD). This will increase the R&D activities of military robotics, automation, and microelectronics, propelling the adoption of robot sensors in the U.S.

These companies are extensively focusing on strategic partnership and collaboration activities to develop application-specific robot sensors in the market. For instance, in June 2020, ATI Industrial Automation, Inc. collaborated with Jet Propulsion Laboratories (JPL), NASA to develop a space-grade force/torque sensor. The new force-torque sensor will be integrated into the Perseverance rover, which is NASA’s Mars 2020 Rover project.

Get this research report on North America Robot Sensor Market customized according to your business requirements.