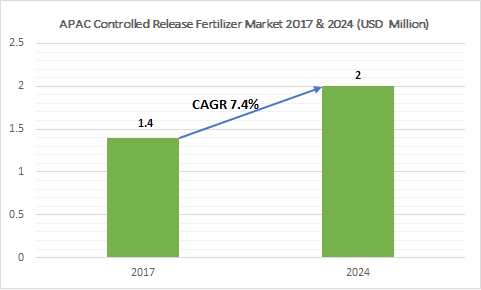 Rising arable land requirements, coupled with rising awareness regarding sustainable farming techniques to increase the food production would significantly drive the China controlled release fertilizer market throughout the forecast period. The regional market in Japan had a significant market share in 2017, and this will grow on a notable CAGR over the coming years.

Some of the key companies in the market include AgroBridge, HIF Tech Sdn Bhd, Greenfeed Agro Sdn Bhd, and Nufarm Ltd, among others.

The above information is provided on a country basis for the following:

Get this research report on APAC Controlled Release Fertilizer Market customized according to your business requirements.