A rising demand for beef, pork, and chicken across Asian countries has been fueling the animal feed demand. Being one of the largest livestock markets worldwide, the APAC region accounts for nearly 40-45% of total global meat production. Since feed phosphate ingredients are crucial components of animal nutrition, the product uptake will grow due to the increased focus on animal health. 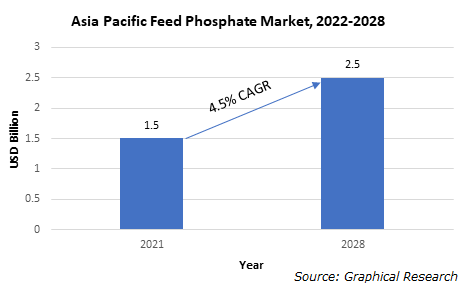 Feed phosphates ensure that animal lactation, reproduction, growth, fertility, and development is optimal, boosting the profits of livestock owners. Although a substantial percentage of the APAC population is non-vegetarian, the accelerated focus toward sustainable practices has rendered vegetarian meat substitutes popular. Increasing number of vegans and easier availability of plant-based meat might hamper the market growth.

During 2022, the alarming rise in the incidence of lumpy skin disease and foot & mouth disease (MFD) raised significant concerns in APAC’s livestock sector. Following a high number of animal deaths, the Australian government has announced that it will spend more than USD 83 million toward biosecurity for combating animal diseases. Growing fund volumes, as well as increased awareness regarding animal health and nutrition, will ensure that regional product consumption from animal farms across the nation will support the APAC feed phosphate market forecast.

During 2020, the shutdown of production units and disruptions in the supply chain negatively affected the animal feed industry in Asia Pacific. Since 2021, industry participants are collaborating to bridge the gaps in supply chains to ensure reliability and continuity of product cycles. They have been partnering with local stakeholders to reach more customers.

Since nutrition has garnered the centerstage in global food trends since the COVID-19 pandemic, several companies are focusing on the addition of essential nutrients such as ammonium phosphate to deliver best animal feed products. Being one of the largest dairy industries in the world, India’s product consumption has been climbing, thanks to the high demand across its domestic cattle feed additives market.

Asia Pacific feed phosphate market share from the cattle livestock segment will witness remarkable growth through 2028, as more livestock owners are focusing on higher meat & milk yields, and healthier animals. In February 2020, the Government of Malaysia announced that it intends to double the nation-wide cattle farming land. The plan involves achieving an increased cultivation area as compared to the existing cattle farm area of over 734,354 hectares by 2025, in order to cut down on imports. This initiative will also ensure that the additional area will generate over 28,463 tons of beef and beef products within a year.

China feed phosphate market size will showcase around 3.5% growth rate during the forecast timeline. Over the last few years, consumer preference for beef in China is growing. According to the Australian Government’s Department of Agriculture, Fisheries, and Forestry, even as pork was comparatively cheaper during 2021, the beef consumption in China was higher than it was in 2020. China’s recent announcement of the 5-year plan will support animal feed additive market. The plan has set production target of 95% self-sufficiency for pork production as well as 85% self-sufficiency for sheep meat and beef production.

Prominent participants operating across the Asia Pacific feed phosphate market are Mosaic Company, PotashCorp, EuroChem, Yara International ASA, OCP Group, Rotem Turkey, and PhosArgo. These companies have been entering mergers and partnerships for retaining their hold of a large market share and geographically expanding their presence. Rising investments from public and private entities will ensure the expansion of food production facilities over the next few years. Feed phosphate manufacturers could also seek key product developments to keep up with changing consumer preferences over the coming years.

Get this research report on Asia Pacific Feed Phosphate Market customized according to your business requirements.