North America Controlled Release Fertilizers Market size is projected to grow with a high CAGR by 2024. 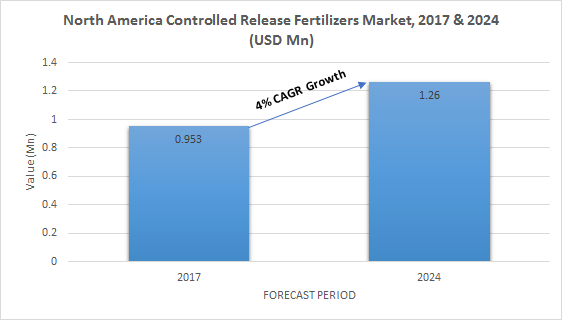 Controlled release fertilizers (CRF) are expected to have a wide scope in North America agriculture, horticulture farming practices by 2024. U.S. holds a leading position in global corn production, with more than 13 billion bushels produced annually. Other leading U.S. exports include: grains, livestock products, soybeans and horticultural products. Increasing CRF usage will add adequate nutritive value to the agricultural land, which will subsequently boost sustainable farming in North America. The higher cost of CRF in contrast to the conventional fertilizers might pose as a market restrain to some extent in the near future. However, with a rise in production scales of CRF, the costs shall be declined from their existing values in future. Decline in product costs will lead to their increased desirability for commodity or broad-acre crops including: wheat, corn and potatoes by 2024.

Cereals & grains held a significant share close to 20.0% among all crops North America CRF market in 2017. Yet, due to the high pricing, their usage is mostly prominent in ornamental, horticultural and turf applications. The other crops segment including: turf, ornamental plants, etc. led the regional CRF market in 2017, with a massive share above 65%.

Get this research report on North America Controlled Release Fertilizers Market customized according to your business requirements.