North America Commercial Drone Market size crossed USD 7 billion in 2020 and is anticipated to expand at a CAGR of 10% from 2021 to 2027. The growing widespread adoption of drones for commercial applications and relative technology developments is fueling the market growth. 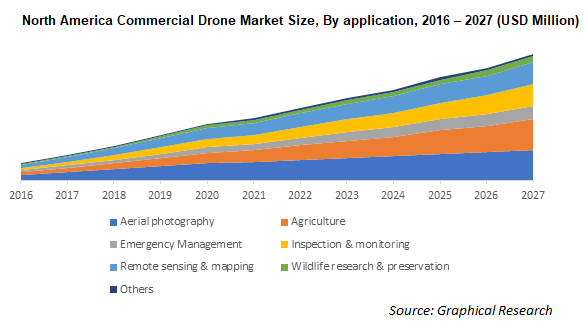 The market growth is further credited to increasing investments in drone technology due to supportive government initiatives. Federal authorities of the U.S. and Canada are focusing on enhancing the regulatory framework with the use of commercial drones. In addition, the regional enterprises are also focusing on developing advanced commercial drone products. These factors along with the widespread penetration of commercial drones are contributing to the regional market demand. For instance, in January 2021, American Robotics received a grant from the Federal Aviation Administration of the U.S. for its autonomous commercial drones. With this approval, the company can operate its automated drones, integrated with detect & avoid technology, across the country.

The fixed wing commercial drone market in North America dominated over 10% revenue share in 2020 due to the increasing adoption of fixed wing drones in various commercial applications such as monitoring, surveying & mapping, remote sensing, product delivery, and others. Fixed wing commercial drone possesses suitable flight characteristics by virtue of its natural gliding capabilities. They can carry huge payloads for long distances with less power.

The semi-autonomous segment is projected to record over 9% growth rate during the forecast period, owing to the growing adoption of semi-autonomous drones for law enforcement, structure monitoring, and other applications. Semi-autonomous mode is becoming a much popular choice of deployment for drone operation than the remotely controlled operation owing to the independence of drone technology in executing a successful flight.

The remote sensing and mapping application segment held a significant North America commercial drone market share in 2020 on account of growing adoption of commercial drones for monitoring and inspecting locations that are not conveniently accessible for people to reach. Moreover, the deployment of commercial drones for surveying and mapping has been on a significant rise with imagery obtained from civilian drones aiding immensely in varied applications including urban modeling, large-scale mapping, and vegetation structure mapping.

Canada commercial drone market is expected to reach USD 2 billion by 2027, attributed to the growing adoption of aerial photography services for the agriculture sector. The companies across the region are providing aerial platforms such as drones for aerial imaging and mapping purposes. The use of drones for personal and commercial purposes in the country is regulated by various government authorities such as Transport Canada and Ottawa International Airport Authority. For instance, in June 2021, NAV Canada, unveiled NAV Drone, a sophisticated application for drone operators to monitor and manage air traffic. This provides real-time information related to airspace restrictions, classifications, etc.

Get this research report on North America Commercial Drone Market customized according to your business requirements.