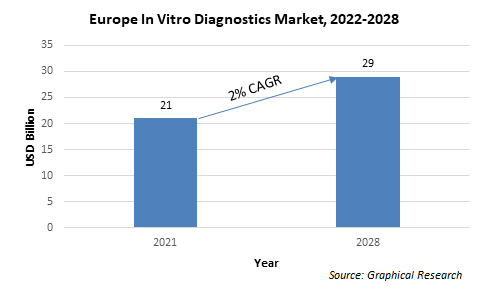 Increasing popularity of point of care testing (POCT) is the major factors that accelerating the market growth. The factors such as faster diagnostic results compared to conventional methods, increased test accuracy, precision, and easier data collection and management offered by POCT centres have resulted in a dramatic increase in point of care testing over the last few years. Furthermore, POCT is less expensive than testing at laboratories and hospitals.

Additionally, with the increasing prevalence of cancer in this region, people are looking for cost effective and rapid diagnostic testing solutions. Similarly, increasing number of pregnancy tests coupled with cost-effective and portable nature of POCT devices will accelerate the overall IVD market revenue.

The instruments segment was around USD 5.8 billion in 2020. This is attributed to the increased use of diagnostic instruments. The high accuracy and functionality of advanced IVD instruments has increased their demand. Moreover, the rapid investments made in the public and private sectors for the development of diagnostic laboratories in emerging economies, as well as the increasing number of product launches.

The clinical chemistry segment will showcase around 2% growth rate in the Europe in vitro diagnostics market during the forecast timeline. Clinical chemistry is used to evaluate body fluids for diagnostic and therapeutic purposes. The most frequently tested samples in pathology are plasma, urine, and serum. The factor such as growing use of approved blood-gas analyzers to monitor respiratory conditions is anticipated to propel the market value. For instance, in March 2020, Siemens Healthineers AG gained FDA approval for the Rapidpoint 500e blood gas analyzer.

The cardiology segment accounted more than USD 2.2 billion revenue in 2020, owing to increasing prevalence of cardiovascular diseases. For instance, according to European Cardiovascular Disease Statistics, every year in Europe, 3.9 million deaths are caused due to cardiovascular disease (CVD), out of which, more than 1.8 million deaths occur in European Union (EU). Such high number of deaths due to heart attacks has led to awareness about early diagnosis of this disease among general population. Moreover, factors such as smoking, alcoholism, poor diet, high blood pressure, and lack of physical activity are all expected to raise the risk of cardiovascular disease. Diabetes mellitus also causes cardiac problems.

The Italy in vitro diagnostics market size exceeded USD 2.2 billion in 2020and is expected to witness over 6% CAGR through 2027. The factor such as rising prevalence of diabetes in Italy and growing awareness about availability of advanced IVD test and devices will augment the market growth. For instance, according to data published by Italian National Institute of Statistics (ISTAT), in 2016, more than 3.2 million people in Italy reported to having diabetes which is accounted for 5.3% of the total population. The report also stated that, 16.5% of the people aged 65 and over suffered from diabetes.

These companies have adopted various strategies such as product launches, collaborations, distribution agreements, and acquisitions that have helped them in sustaining the market competition and gain significant position. For instance, in April 2020, Thermo Fisher Scientific announced the launch of CE/IVD marked Cascadion SM Immunosuppressants (ISD) Panel and expanded its European offering of pre-validated assays for the Thermo Scientific Cascadion SM Clinical Analyzer.

What is the value of Europe in vitro diagnostics (IVD) market?
The market size for in vitro diagnostics (IVD) in Europe had exceeded USD 16.8 billion in 2020 and will observe a CAGR of 4.8% through 2027 with the growing popularity of point of care testing in the region.
Why are IVD instruments in high demand across Europe?
Instruments segment had recorded valuation of over USD 5.8 billion in 2020 owing to increasing investments in the public and private sectors for the development of diagnostic laboratories.
Why is Europe IVD industry recording substantial growth across cardiology segment?
Cardiology segment had accounted over USD 2.2 billion revenue in 2020 with the rising demand for IVD in the region driven by the rising prevalence of cardiovascular diseases.
Why is vitro diagnostics segment witnessing robust growth in Italy?
The market for in vitro diagnostics in Italian will exhibit CAGR of over 6% through 2027 with the increasing pervasiveness of diabetes along with the wide availability of advanced IVD test in the country.
Which are the major companies active in Europe in vitro diagnostics landscape?
Major players operating in the market include Abbott, Danaher, Siemens Healthineers, F. Hoffmann-La Roche AG, BioMerieux, DiaSorin, Sysmex Corporation, Bio-Rad Laboratories, Thermo Fisher Scientific, Ortho Clinical Diagnostics, Qiagen, Becton, Dickinson and Company.

Get this research report on Europe In Vitro Diagnostics (IVD) Market customized according to your business requirements.