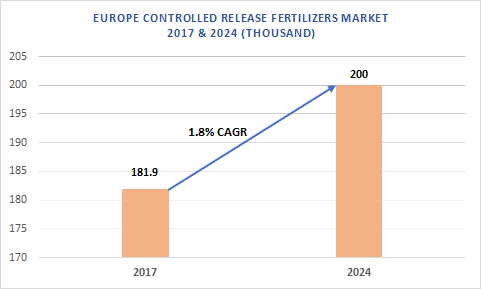 The Europe Controlled Release Fertilizers Market value exceeded USD 181.9 Thousand in 2017 and is expected to rise at a CAGR of over 1.8% to hit USD 200 Thousand by 2024

Agriculture accounts for almost 40% of land in Europe, which is fairly a large number. Rapid industrialization has resulted in decrease in number of farms and increase in average farm size in past few years. This has created considerable pressure on agricultural land for meeting food demand of the growing population and reduce environmental impact of hazardous pesticides and pesticides. According to EU commission reports on mineral fertilizers, 2016, the European fertilizer industry has an annual turnover of 13 billion Euros and provides approximately 95,000 jobs across Europe.