Asia Pacific Commercial Drone Market size valued at USD 5 billion in 2020 and is set to observe around 15% growth rate from 2021 to 2027. Growing adoption of commercial drones in the retail & e-commerce sector for the delivery of goods & packages is driving the market growth. 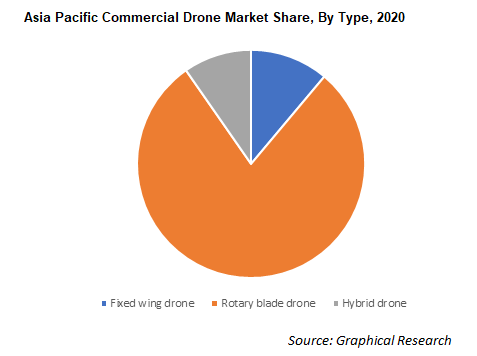 Moreover, supportive government projects for enhancing the use of drone technology are providing lucrative market growth opportunities. For instance, in September 2021, The Union Government of India approved the PLI Scheme for drones and drone components with the allocation of USD 1.2 billion over the next three years. This scheme will not only boost the domestic manufacturing of drones but also develop use cases and applications across various sectors.

The remote operated drone segment will grow significantly during the forecast period. The growth is attributed to the growing usage of sensor-based drone technologies. Remotely operated drones comprise conventional features of operating a machine through remotes. A drone comprises a receiver for receiving instruction signals from a remote controller. The remote mod e of operation also ensures that the drone is completely under the vision of the operator, thereby making the operator responsible for the operation of the drone in the air.

China commercial drone market size is predicted to exceed USD 10 billion by 2027 credited to the growing use of commercial drones across various sectors such as agriculture, mining, and cinematography. The country has a handful of drone manufacturers and has established itself as a leader in arms exports, especially drones. For instance, in November 2021, DJI launched two new drones, Agras T40 and T20P in China. Drones are equipped with coaxial twin rotor design. The T40 farming drone includes a spreading capacity of 50kg and a spraying capacity of 40kg. The drones also feature omnichannel radar and binocular vision to detect obstacles at a distance up to 80m.

Manufacturers are developing advanced drone solutions. For instance, in January 2021, Sony Corp. launched Airpeak brand with the aim of developing drone technology. Airpeak is the world’s smallest class of drone that is equipped with an Alpha mirrorless camera to capture high quality, full frame aerial photography, and video.

Get this research report on Asia Pacific Commercial Drone Market customized according to your business requirements.