The increasing investments in the AR technology to support several industrial applications are driving the demand for these products in the market. The applications of these devices in several production and manufacturing processes such as quality testing, component testing, and process monitoring are encouraging the developers to cater to the manufacturing operations. Several advantages offered by these devices in production processes are faster work, an easy access to data, reduction in production downtime, and prevention of errors. For instance, Newport News Shipbuilding, which is a manufacturer of the U.S. Navy aircraft carriers is using these devices for carrying out several processes. 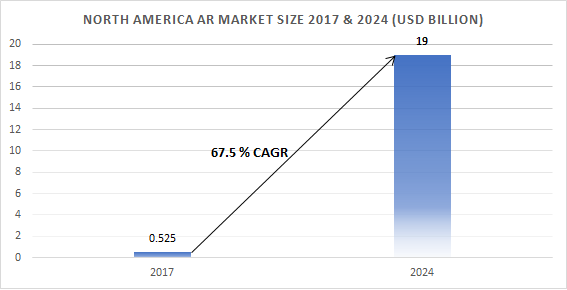 Manufacturers in the market are developing smart glasses, which are integrated with onboard processors, and wireless & mobile connectivity. These glasses provide hands-free access to data and remote video capabilities. Several advantages of these devices include virtual assistance, video collaboration, and video streams. They are used in several industrial sectors such as healthcare, military & defense, etc. Google is offering smart glasses to the disabled people, which allow them to send messages and express themselves through the media.

Adoption of this technology in the gaming sector is growing significantly the market with an increase in spending on entertainment by the consumers and the interest in gaming among the youth. Several games and applications have been launched, which support technologies such as Ingress and Pokemon Go. The region accounts for the majority of the revenue share in the gaming sector. The availability of major players providing gaming solutions is boosting the demand for these devices. Such gaming companies are promoting these products in the North America AR market.

Key players operating in the market are Google, Microsoft Corporation, Oculus VR LLC, AccuVein, Inc., Affectiva, Inc., and APX Labs, among others. These players are competing based on the requirements of various industrial sectors. They are targeting their products in the military & defense sector wherein the enormous development of these devices will be witnessed in the future. The companies in the North America AR market are adopting several strategies, such as new product development, product differentiation, and mergers & acquisitions, to capture the industry share. For instance, in May 2018, Google acquired Owlchemy Labs, which provides reality-based devices.

Get this research report on North America Augmented Reality Market customized according to your business requirements.