The increasing adoption of AR smart glasses in several industrial sectors is growing at a rapid pace in the Europe AR market. Industrial segments where these devices are being implemented include healthcare, military & defense, and automobile. They are equipped with several technical solutions such as operating systems, processors, storage, and navigation controls. The applications of this technology include video collaboration, complex manufacturing, logistics & warehousing, and building & construction. In June 2018, Epson launched its updated version of Moverio smart glasses in Europe, which is integrated with HDMI and USB connectivity. 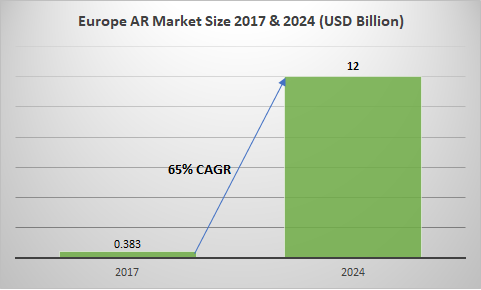 The software provided by several manufacturers in the Europe AR market operates as applications that integrate visual content into real-world environments. Several applications or software have been developed by manufacturers such as JavaCV, Argon, ARToolKit, ApertusVR, and Goblin XNA. The technology is used for several purposes such as work, training, and consumer applications in several industries such as healthcare, tourism, safety, and marketing. Major players in the Europe AR market providing the software include Augment, Sun-Seeker, and Cognitive Clouds.

The applications of these devices in the automobile sector are gaining momentum owing to the integration of this technology with several applications such as test drive, designing stage and innovative support service tools. For instance, Volkswagen developed an app, which allows its customers to experience AR-based test drives. Heads-up Displays (HUD) are widely used in transforming windscreens into computer screens, which displays vehicle speed, live traffic data, navigation indications, weather information, and collision warnings. Countries including Germany and France have a high availability of automobile manufacturers, which are adopting this technology, thereby driving the Europe AR market growth.

Key players operating in Europe AR market are Vitualware, INDE, Blippar, Daqri LLC, Google, Inc., Medsights Tech Corp., and Microsoft Corporation. These players are targeting their offerings in the automobile sector wherein a high demand for these devices can be witnessed. The presence of strong players in the Europe AR market is expected to generate an enormous demand for the AR technology. Companies are adopting several strategies such as new product development, product differentiation, and mergers & acquisitions. For instance, in June 2018, Apple announced to launch phone-to-phone augmented reality, which allows two users to see the same virtual object on their individual devices.

Which is the major factor to drive the Europe Augmented Reality (AR) Market?
The growing adoption of the technology by the entertainment & gaming sector is gaining momentum with the increasing interest of people in gaming products in the Europe AR Market.
What will be valuation of market in 2024?
According to Graphical Research, Europe (AR) Augmented Reality Market size to exceed $12bn by 2024.
Which are the key players operating?
Key players operating in the Europe AR Market are INDE, Vitualware, Daqri LLC, Blippar, Medsights Tech Corp, Google, Inc., and Microsoft Corporation.

Get this research report on Europe (AR) Augmented Reality Market customized according to your business requirements.