Playing a vital role in businesses digital transformation journeys, North America private LTE market has been growing at a consistent pace through the past decade. The increasing number of connected devices used in various businesses has created an ideal environment for product expansion. Industries such as manufacturing, retail, mining, and logistics are all banking on the advantages offered by private LTE. As of November 2019, Nokia had been involved in over 120 private LTE installations across several sectors throughout the world. 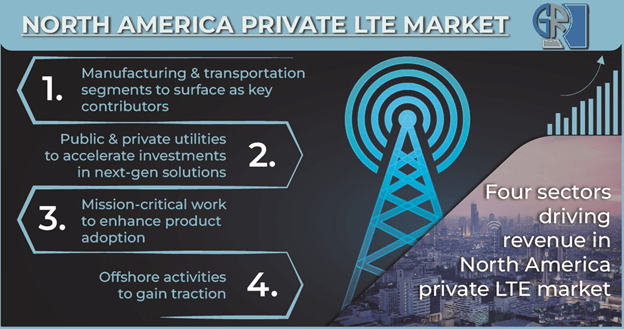 Manufacturing and transportation have been early users of private LTE networks. Manufacturers such as Hitachi and Toyota have installed private LTE/5G networks in factories to support mobile assets such as AGVs, as well as applications such as video surveillance that promote productivity improvements and health and safety.

Transport hubs were among the first to benefit from private LTE networks. Push-to-talk, speech and video applications, as well as remote monitoring and control of heavy machinery, are all supported by networks in this industry. Growing public investments in the transportation sector across the nation will support Canada private LTE industry outlook.

Private LTE networks are known to provide future-proof, highly secure, dependable, and resilient cellular connection to the government and public safety agencies, utilities and rail transport businesses. Have a look at the recent developments made in this sector:

Capitalizing on the end-to-end security features provided by private LTE, newer networks are being built and installed to suit the needs of mission-critical work. For example, Anterix, a US-based private LTE solutions provider, secured a broadband allocation inside the 900 MHz section with the Federal Communications Commission (FCC) in 2020.

The company offers its solution to the energy, transportation, and logistics industries. Anterix facilitates mission-critical functionality of private networks for utilities and corporations by granting licenses for service use. Recently the company also struck a $50 million contract with San Diego Gas & Electric, laying the groundwork for smart-grid and wildfire mitigation measures.

Since reliability is crucial in the offshore business, having a consistent, continuous, and dependable connection, such as private LTE, is a boon for the industry. Several businesses have implemented this technology to conduct operations without being hampered by a loss of connectivity.

In May 2022, Ericsson expanded its IoT connectivity capabilities by collaborating with offshore communications network leader Tampnet. With this collaboration, the company plans to improve operational efficiency while lowering carbon footprint. The newest sensors and remote monitoring equipment derived from the deal may be distributed to individuals in a range of remote offshore areas, using Ericsson IoT Accelerator's management capabilities.