The concept of digitization has considerably picked pace across North America as POS terminals are being used on a large scale to facilitate ease of payment and transparency while carrying out various transactions. The COVID-19 pandemic was responsible for increasing the sale of POS terminals in the region as the demand for contactless payment platforms grew at a significant rate.

The number of COVID-positive cases were growing every day and governments across North America were issuing mandates to keep people safe from getting infected by the virus. This scenario boosted the use of POS systems as they facilitate contactless payments and citizens would not have to worry about contracting the virus.

The POS device has undergone several upgrades since its first appearance in retail stores all the way back in 1879. Its most recent version, the ePOS or virtual POS is one of the most advanced solutions as it can convert a smartphone into a POS system with the help of an application. Such developments in the POS technology will surely augment their demand among consumers in North America. 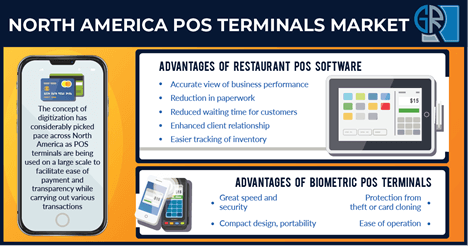 There are several advantages of using biometric POS terminals, such as great speed & security, protection from theft or card cloning, compact design, portability, and ease of operation, among others. Moreover, a wide range of sectors, including retail, healthcare, telecom, and law enforcement are extensively using biometric POS terminals, thereby boosting the demand for this technology.

Robust use of mobile POS system:

North America mobile POS terminals industry size will grow at a notable rate as several business owners are using these products on a large scale. Some of the reasons why mobile POS systems are gaining momentum across the region are because they are portable and can enhance a customer’s shopping experience.

They require minimal setup and can be integrated to multiple devices, both traditional and new. Since retail store owners cannot save the debit or credit card details of their customers on mobile POS devices, the possibility of a security breach decreases significantly, which will foster their use.

Role of POS software in restaurants:

POS software will witness high demand among restaurant owners in North America. The software can help them improve their productivity and efficiency. Some of the advantages of using restaurant POS systems include, accurate view of business performance, reduction in paperwork, reduced waiting time for customers, enhanced client relationship, and easier tracking of inventory.

The digital era is fast becoming a reality in North America as a large percentage of the younger population is demanding faster and more convenient modes of payment. POS devices also play a vital role in keeping an accurate track of the inventory and letting business owners know if there is a shortage of the same. The traditional cash registers may soon be replaced by POS terminals as they can keep an electronic and exact record of several transactions.

These organizations are entering into strategic partnerships and merger & acquisition deals to expand their product & service portfolios. For example, in April 2021, Canada-based PUDO Inc. had announced a strategic partnership with the U.S.-based National Retail Solutions, a company that offers POS solutions to independent businesses. Through this partnership, PUDO aims to increase the implementation and activation of PUDOpoint Counters with NRS retailers across the U.S.