North America has witnessed a substantial rise in the number of pet owners in recent years, which will positively impact the regional pet insurance market forecast. Another reason attributed to the rise in the demand for pet insurance is that the elderly population in the region is growing at a notable pace.

According to the ‘2021 Senior Report’ by the American Health Rankings, over 54 million adults aged 65 years and above live in the U.S. By 2050, this figure is predicted to touch 85.7 million, which will occupy around 20% of the country’s total population. Particularly across North America, pet therapy is quite popular; pets play an important role in helping old people overcome loneliness, depression, and other mental health issues.

According to Forbes, nearly 67% of homes in the U.S. own at least one pet. The COVID-19 pandemic has been stressful for pets as well as many have become victims of various mental health ailments. It has become a matter of concern for pet owners and has also spurred an important conversation on pets facing mental health problems.

To overcome these challenges, pet insurance is of utmost importance as many companies specializing in this area are coming up with the best pet health insurance plans. These plans can cover the veterinary costs of diagnosing behavioral problems in pets. While the pet insurance market in North America has been showing consistent growth over the years, the pandemic has been instrumental in helping insurance companies skyrocket their policy sales.

As per the 2021 ‘State of the Industry Report’ by the North American Pet Health Insurance Association (NAPHIA), the year 2020 recorded $2.17 billion in total premiums sold, which showed an increase of more than 26% from $1.71 billion in 2019. 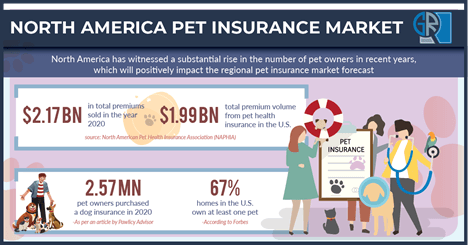 Pet accident & illness insurance policy is predicted to capture a major share of North America market by 2027. The incidence of chronic illnesses in pet dogs and cats is rising at a notable rate in the region every year. As per the WHO, rabies is one of the leading chronic diseases that is mostly found in pet dogs and occurs in over 150 countries and territories.

The disease incurs an estimated cost of $8.6 billion every year and 40% of children under the age of 15 have been bitten by suspect rabid animals. Here, pet insurance plays a vital role as these life-threatening diseases can be prevented with the help of timely vaccinations.

There are several insurance policies that cover medical and other veterinary costs. Pets can also fall prey to major accidents, which is a prime cause of concern for the owners. In such a scenario, pet health insurance also covers the expenses of surgery and other medical costs.

North America industry size from dog insurance policies is predicted to register a strong CAGR over 2021-2027. As per the Insurance Information Institute, around 69 million households in the U.S. have a dog as their pet. This figure shows the high demand for insurance covers for dogs. Also, 2.57 million pet owners have purchased dog insurance in 2020, as per an article by Pawlicy Advisor.

The number of pet dogs falling prey to potentially fatal diseases is increasing. While most of these ailments can be prevented by giving timely vaccinations, dog owners are highly demanding pet insurance plans to cover for veterinary costs incurred due to accidents or other major diseases.

The U.S. is estimated to hold a significant share of North America pet insurance industry by 2027. According to the Insurance Information Institute, around 90.5 million families own at least one pet. Additionally, pet owners are becoming aware of the importance and advantages of purchasing a pet insurance, which will positively impact their demand among clients in the U.S.

Pet insurance has started taking centerstage in many countries across North America. The COVID-19 pandemic has highlighted various mental health issues that can limit a pet animal’s development potential. To keep both the physical and mental health problems at bay, several pet owners are buying health insurance policies to help them bear the veterinary costs that arise from accidents and diseases.

Well-known organizations, including Crum & Forster, Nationwide, Pet for Health, and Embrace Pet Insurance Agency, among others, are creating attractive pet insurance policies for customers across North America. Partnerships and merger & acquisition deals have become an important strategy for pet insurance companies to survive stiff competition, increase their customer base, and diversify their product & service portfolios.

For example, in November 2021, AXIS Insurance partnered with the UK-based Petplan to help the former offer underwriting capacity to create comprehensive pet insurance plans for dogs and cats in the U.S. and Canada. Such strategies will boost the demand for pet insurance across North America.