Consistent demand for crude oil products will impact North America hydrogen generation market forecast positively. Regional governments are undertaking various initiatives to promote the role of hydrogen in decreasing the sulfur content in a wide range of fossil fuels, such as petrol, diesel, and gasoline.

Since hydrogen is energy-dense, light, storable, and carbon-neutral, many industries, such as construction, transport, and power generation, are switching from fossil fuels to this chemical element to reduce their carbon footprint. In 2020, the U.S. Department of Energy (DOE) launched its Hydrogen Program Plan, a strategic framework that will incorporate the research, development, and demonstration activities of various offices of energy. This scheme aims to enhance the production, usage, transportation, and storage of hydrogen across a variety of sectors in the U.S. economy. 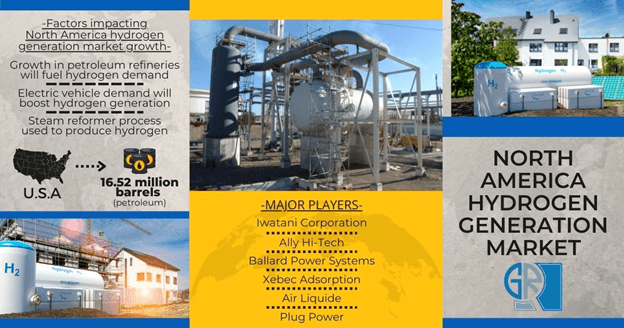 North America is seeing a strong rise in the number of petroleum refineries to cater to the growing demand for oil & gas products. According to the U.S. Energy Information Administration (EIA), as of January 2021, there were 129 active petroleum refineries in the country.

These end-users are making efforts to increase the overall capacity of their existing refineries, either through upgrades or via new construction. As per the EIA, the U.S. produces an average of 16.52 million barrels of petroleum per day, with crude oil accounting for 11.18 million barrels. These statistics have played an important role in increasing the use of hydrogen across petroleum refineries to decrease the total sulfur content and reduce carbon emissions.

Electric vehicles are becoming the future of the automotive sector of North America due to the efforts made by people and governments to switch to carbon-neutral means of transportation. With the presence of reputed companies like Tesla, the demand for electric cars has seen tremendous growth in recent years.

Regional governments are providing financial support to enhance the adoption of EVs. For instance, in May 2021, the Joe Biden administration announced an electric vehicle proposal worth USD 174 billion to boost the production of EVs in the U.S. Many electric vehicles are being developed that will use fuel cells powered by hydrogen, making them one of the most eco-friendly modes of transportation.

The steam reforming process will capture a major share of North America hydrogen generation industry by 2026. Also called steam-methane reforming, it is the most commonly used production technique wherein a methane source, like natural gas, is used to produce pure hydrogen.

If refineries and other sectors are looking for an eco-friendly alternative to fossil fuels to be used in steam reforming, biomass is highly recommended because it can enhance the CO2 balance of the process. Since any type of biomass can be used in this highly flexible production method, the total hydrogen output level is quite high.

North America hydrogen generation industry trends will be favored by the region-wide demand for cleaner fuels, alongside supportive government initiatives to accelerate the production of this fuel. Leading companies, including Iwatani Corporation, Air Liquide, Ally Hi-Tech, Ballard Power Systems, NEL ASA, Plug Power, HYGER, Xebec Adsorption, and Messer, among others, are the major participants in this market.

The partnerships, mergers, and acquisitions announced by these organizations aim at strengthening the support for hydrogen-based fuels and other related products. For instance, in October 2021, the U.S.-based National Renewable Energy Laboratory (NREL) signed a partnership agreement with clean hydrogen firm Electric Hydrogen to create high-performance electrolyzer components. This will upscale the production of clean hydrogen and pave the way for newer decarbonization opportunities.